Talking outside the box 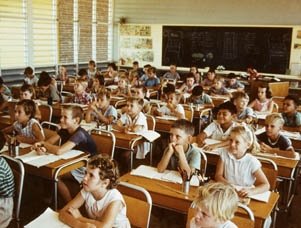 Reluctant though I am to intrude on the private correspondence between my colleague and a few of our forum members, I nevertheless feel that there are one or two thing I should like to interpolate. No, not about toys. This is not a posting about toys. They are very important but I do not understand them (though I did see what my colleague tells me must have been T-55s rolling down streets as a wee child) and, therefore, leave them to those better versed in the subject.

So, I shall continue to cover other subjects and, with a bit of luck, annoy people quite considerably.

This morning I spent talking to two groups of sixth formers at a secondary school in west London. This is not the first time I have addressed school children and consider the effort very well worth making. Today's sixth formers are, after all, our future and they will need all the weapons at their disposal to survive and fight in the international jungle that is rapidly growing around us all.

As ever, there were several curious aspects to the exercise. That most of the seventeen-year olds I speak to know very little about anything outside their immediate existence does not surprise me. I was seventeen myself once and, though, I considered myself to be extraordinarily well informed about the world and ready to discuss it at the drop of a hat, other people may well have had a different opinion of my knowledge.

Nor am I particularly suprised by the lack of interest displayed by a large proportion of the boys and girls, who are clearly dragooned into attending these sessions with outside speakers when they would much rather be gossiping in the library. The teacher who had organized this particular session, was rightly insistent in our discussion on the way back to the underground station that these sessions will be very useful to them in the future.

He was also rather despairing about the lack of knowledge they and, indeed, most people in this country (and the rest of the European Union) display of the structures, politics and legislation of that body. Though we disagreed in our opinions - he being rather a supporter of the project for all the usual reasons: social integration, people being friendly to each other and trading with each other etc - we did agree in deploring the lack of interest in a subject that affects everybody's life.

By and large, both my colleague and I agree that we do not find the children difficult, even when they waffel away in a slightly silly fashion. In my experience they are well behaved, polite, interested to some extent and ready to ask about various points raised. It is not their fault that they are rarely taught to think in a logical fashion and encouraged to emote instead.

When we get over the tongue-tiedness and inevitable shyness, as well as the giggling attempts to get someone else to speak (all very familiar to those who remember their own teens), out come the comments that they have clearly been taught.

What, we were discussing, is the Single Market? It is a very beneficial structure for consumers. Why is it beneficial? Um, well, it strengthens competition and removes barriers between countries in trade. But could that be achieved without the political superstructure (actually, I did not use that Marxist term)? Blank looks all round. Clearly the children had not thought in those terms and, more importantly, had never been encouraged to think in those terms.

Now, this is not another "let's knock the teachers" posting, though I did get somewhat irritated by one young lady teacher today, who very charmingly kept trying to drag the discussion back to the benefits of the EU and away from its structures, legislation and democratic deficit. The point is the emotionalism.

The EU is a singularly boring subject. Its ways are complicated to the point of incomprehensibility. But, I maintain, intelligent seventeen year olds should be encouraged, as far as possible, to try to find their ways through the labyrinth. They should not be filled with warm muzzy feelings.

They are quite capable of thinking, if needs be, as several (all girls, as it happens, today though not always in the past) demonstrated it. After I mentioned several times that one must differentiate between facts and opinions, one of them challenged me on a glib statement about the relative difficulties of starting a business in France and Britain. Was that a fact or my opinion? I had to justify very coherently what I had said.

On another occasion, in a different school, I was asked by a boy how I could justify support for democracy and free trade. What of the countries that were not democratic? It is no bad thing, I find, having to reply to questions like that.

In return, I'd like to think that at least some of my audience has gone away to think about a few very new ideas: that trade across boundaries does not require political integration or a huge regulatory structure; that business does not need a "level playing field" but a chance to compete; that the world is a bigger place than just Europe; and that high social protection leads to unemployment that hits the poorest and most vulnerable first. It was worth the trip out towards Heathrow this morning.