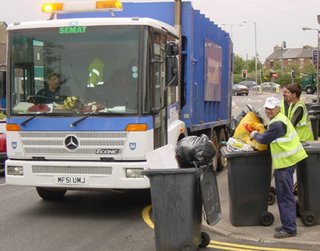 It was rather helpful of The Times today to inform us that Britain spends £2.6 billion on domestic waste collection and disposal, equivalent to £120 per household per year.

That gross figure provides a useful baseline against which to compare the costs imposed on us by its ill-conceived landfill directive, currently estimated at £5-8 billion a year, on top of an investment of £10 billion to provide the alternative disposal infrastructure.

In other words, courtesy of the EU, the costs of one of our most basic council services is to increase three to four-fold but such is the madness of our age and the paucity of public debate that, instead of railing against this entirely unneccessary burden, no less than Sir Michael Lyons is actively considering whether homeowners should paying a second tax to meet the expense.

Sir Michael is apparently considering this option as part of a range of proposals to reform council tax, telling us it's "a fairness issue". The dreadful man argues, "Why should people who don’t take recycling very seriously or have a lifestyle that generates a lot of waste be able to do that when their neighbours are being very careful not to generate waste and putting their energies into recycling?"

For sure, there is a fairness issue here, but not the one Sir Michael would care to raise: why should we pay four times as much for the collection and disposal of our rubbish just to satisfy an EU directive, especially as so much of the "recycled" material simply ends up in China to pollute their environment?

Bearing in mind that the Tories no longer "do" Europe, at least we had a half-way sensible comment from Caroline Spelman, the shadow secretary for local government, who, once she had got over the obligatory "greenie" bit, said, "the danger with a scheme like this is that it will increase fly-tipping by those who simply don't want to pay the charges."

And ain't that the truth. Many times we have reported that the current measures are leading to an epidemic of fly-tipping and, in some cases, so lucrative has it become that criminals are even moving out of drug dealing into illegal waste disposal because it is more lucrative.

Nor is this only a British phenomenon. Tucked in a report in The Independent last week, entitled "Italy is Europe's worst environmental offender", was the news that:

Among the more pernicious problems are the increasing involvement of Mafia-like gangs of criminals muscling into the disposal of hazardous waste: offering bargain prices to factories in northern Italy with dangerous waste to dispose of, trucking it to the south of the country, faking the documentation and dumping it in landfills or even in national parks.

All this reinforces one of those universal truths, that there is nothing so bad that an EU bureaucrat cannot make it worse. And, courtesy of Sir Michael, it looks as if we are going to have to pay through the nose for the privilege.