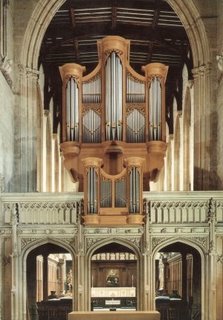 Despite attempts by The Observer on 14 May last to engineer a "collision course with Brussels", with minister for energy, Malcolm Wicks, cast in a heroic mould, protecting church organs from the depredations of the Restrictions on Hazardous Substances, it has all come to naught.

According to Reuters, "brides and grooms can breathe easy as the European Commission said on Tuesday it had decided church organs are not covered by a directive that bans the use of hazardous substances, such as lead, which is used to make pipes for organs."

The head of the European Commission in London, Reijo Kemppinen, said: "British organ builders need not fear for the future of their art and craft. The European Union has no wish to jeopardise this ancient tradition."

Of course, you could have read precisely that on this blog on 30 March, just short of three months ago. However, as we are all aware, blogs don’t actually report news – the are entirely derivative, following in the wake of the professional journalists of the MSM who know so much better than us.

We are sorry for getting it so wrong.