First shot across the bows 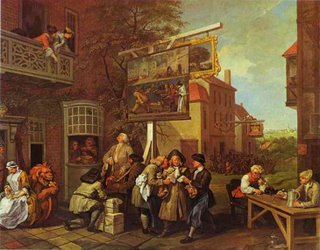 It seems quite extraordinary but politicians cannot draw the right conclusions even on the basis of random activity. You’d think they would do so once in a lifetime. Well, you’d be wrong.

Take the question of money for peerages – not, in my opinion, a particularly heinous crime and a considerably better kind of behaviour than extracting money from the body politic as MPs do. However, the media and, therefore, our political classes chose to view it as the greatest disaster that had ever befallen this country and ….drew the wrong conclusions.

What both Blair and Cameron want is state funding for political parties, a development that would widen the gap between the politicians and the people to whom they should be accountable even further.

While it is reasonable to discuss ways of changing the rules of private, business and organizational (remember the unions?) funding, the idea that somehow it will be more open, more transparent, more democratic for political parties to be funded by the taxpayer according to a decision made by some overstaffed and highly expensive quango, is preposterous.

Inevitably, we are going to have a Review, a close relation of Consultation. The Review will be conducted by One of the Great and the Good, in this case, Sir Hayden Phillips, whose biography I reproduce here for the edification of our readers:

“Sir Hayden Phillips is chairman of the National Theatre, senior adviser at Hanson Capital and charities consultant to HRH The Prince of Wales. He is a director of St Just Farms Ltd, of GSL, and an adviser to Englefield Capital. He is chairman of the Salisbury Cathedral Fabric Advisory Committee, chairman-designate of Marlborough College Council and a governor of the Wiltshire Historic Buildings Trust.

His previous career was in the Civil Service. He was Permanent Secretary of the Lord Chancellor's Department from 1998 to 2004, and Permanent Secretary of the Department for Culture, Media and Sport from 1992 to 1998. Before that he held senior positions in the Treasury, the Cabinet Office, the Home Office and in the European Commission. His report on The Review of the Honours System was published in July 2004.”

On the website he gives all sorts of rather pompous ideas as to how he is going to conduct his Review. We, on this blog, take issue with his three “unarguable” basic principles:

How parties are funded should be fully transparent

A future system should encourage democratic engagement and be as fair as is possible between parties.”

Well, one out of three ain’t bad. Not good but not too bad, either. To start with, the assumption that the “financial health” of specific political parties is fundamental or even essential to parliamentary democracy is nonsense. There have been many parties in this country’s political history and, one hopes, there will be many more. If a party is not financially solvent or healthy it tries to change that situation within the legally allowed framework or it disappears. Too bad.

Most of us will go along with the second point, though “fully transparent” needs some definition.
The last point again, makes no sense. Who is the arbiter of fairness? The government? Some overpaid quango? Some overpaid and pompous civil servant, who is unlikely to look favourably at parties outside the establishment?

Surely, as long as laws are not broken, if people, businesses and organizations want to give more money to one party than to another, that is their privilege. What they get out of it, is a different matter.