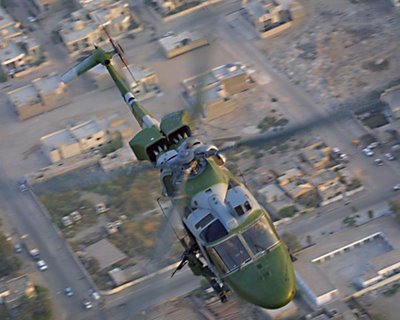 While hunting for photographs for my previous post, I came across this remarkable shot of a Lynx flying over Basra, which I couldn't resist. Disregarding the superb view of the "toy" and looking beyond that, what immediately strikes one is the narrow, cluttered streets (not). Bearing in mind our previous exercise, it really is getting very hard to take Lord Drayson seriously. One has to ask, what is that man for? 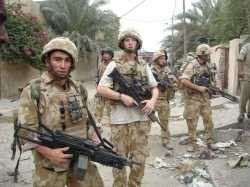 Also emerged is another shot of Basra, this co-incidentally taken at the time of the recent, tragic Lynx crash in Basra - reported to have been taken out by an RPG. It shows a dismounted patrol, but the location is interesting - clearly a back-street scenario. Once again, what is striking is the width of the lane, clearly more than sufficient to allow an RG-31 passage, or even something more substantial.

And, a propos my previous post, a thought occurred. The Second World War lasted six years, whence we went in with biplane fighters and emerged with jet aircraft. Now, it is taking eight years bring an updated version of an existing helicopter into operational service - two years longer than the entire length of the Second World War.

It is a good job Drayson wasn't around at the time, in charge of the Spitfire programme.