Keep those migrants in their place 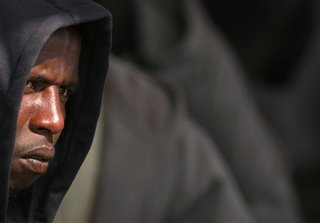 Spain has called a conference of fifty European and African governments in the Senegalese capital a couple of days ago to draw up a plan to deal with the flood of migrants who are leaving their homes to undertake the hazardous journey to European countries where they are unlikely to find employment.

As the Washington Times puts it, Spain is in the forefront of the problem but the article highlights only one aspect of that: the number of migrants who are arriving in that country. There is no mention of Spain’s complicity in causing the problem by depriving fishermen of their livelihood.

Of course, this is the EU’s problem largely, as the third country agreements, which are part and parcel of the CFP, now supported by the modern caring compassionate Conservatives represent one aspect; the other is the aid that the EU pours into African countries as it deprives the people of their livelihood – aid that supports oppressive, kleptocratic governments.

None of this is mentioned in the article and, one assumes, in the document, known as the plan, was produced by the meeting.

“The plan -- originally drafted by Morocco, Spain and France, three countries in the front line of the immigration problem -- is expected to be adopted by European and African ministers at a summit on migration July 10 and 11 in the Moroccan capital, Rabat.

"This is a political initiative of the highest importance that aims to combine both managing migrant flows and managing development," said Alvaro Iranzo, a senior Spanish Foreign Ministry official.

On Europe's southern flank facing Africa, Spain is the first target of thousands of penniless sub-Saharan Africans seeking entry to Europe, and Madrid has begun a diplomatic offensive in West Africa to try to stanch the flow.

But while coastal patrols and surveillance can cut illegal departures, European and African experts agree that such short-term measures will be useless unless the unemployment, poverty and conflict that prompt migration from Africa are tackled.

"If we don't go to the root causes, there's not going to be a solution," Moroccan delegation chief Youssef Amrani said.”

No mention of the Common Fisheries Policy or of the third country agreements.