How can they be nasty about that nice Mr Annan? 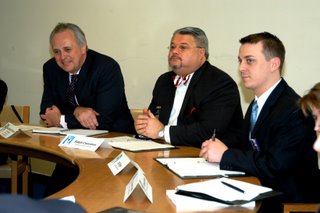 Oh dear. Boo-hoo. This is just so sad. Waaahh-haaah!. Can’t help laughing ….woops …..sorry, crying. Mr Mark Malloch Brown (yes, one of ours), deputy to SecGen Kofi Annan (father of Kojo) has attacked the United States for … oh dear, somebody give me a handkerchief … undermining the United Nations.

“"The prevailing practice of seeking to use the U.N. almost by stealth as a diplomatic tool while failing to stand up for it against its domestic critics is simply not sustainable," said the deputy, Mark Malloch Brown. "You will lose the U.N. one way or another."

In a highly unusual instance of a United Nations official singling out an individual country for criticism, Mr. Malloch Brown said that although the United States was constructively engaged with the United Nations in many areas, the American public was shielded from knowledge of that by Washington's tolerance of what he called "too much unchecked U.N.-bashing and stereotyping."

"Much of the public discourse that reaches the U.S. heartland has been largely abandoned to its loudest detractors such as Rush Limbaugh and Fox News," he said.”

And what do these heinous organizations report or discuss? Could it be the oil-for food scandal, or the unresolved question of the limousine purchased by the egregious Kojo Annan, or the behaviour of UN troops in Africa and the Balkans? Or, for that matter, the suspension of one UN official after another because of financial malfeasance? Then again, there is the saga of sexual harassment in UN offices. (Maybe it’s Prescott who should become the new UN SecGen, not Blair as it is touted round the MSM. He will be right at home.)

John Bolton’s office reacted icily with his spokesman, Richard A. Grenell, pointing out that Malach Brown did not extend them the courtesy of sending over a copy of the speech ahead of delivery. In the fullness of time they will respond.

Of course, even the New York Times knows what the real problem is:

“The speech reflected frustration in Mr. Annan's office with a looming crisis over the United Nations budget, which, under a six-month gap agreed to under pressure from Washington in December, will pay the bills only until the end of June.

The deal was struck to link budget approval with achievement of significant management reforms, and Mr. Bolton made frequent mention of Congressional impatience with the United Nations and legislation that would authorize Washington to start withholding its dues. The United States is the largest contributor to the United Nations, paying 22 percent of its budget.”

One would have to have a heart of stone not to laugh at this self-pitying nonsense.