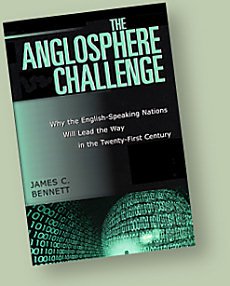 A combination of day-jobbing and difficulties with internet connection at home has meant a very weak presence on the blog. This has given me a feeling of not quite understanding what is going on. (Yes, yes, there are numerous people around who would say I suffer from that all the time, particularly if they don’t agree with me.)

However, some good things come out of everything. Yesterday I spent the afternoon talking to the guru of the Anglosphere, James Bennett, President of the Anglosphere Institute and author of The Anglosphere Challenge: Why the English-Speaking Nations Will Lead the Way in the Twenty-First Century. In the evening, to round things off, I was privileged to chair the meeting organized by the Bruges Group at which Jim Bennett spoke to an appreciative audience.

Well, it was largely appreciative. There was a Conservative candidate for the European Parliament who announced in ringing tones that matters European were all going our way and Anglospheric ideas will win in Europe as they have always done. There must be an underground establishment where these people are bred.

Jim Bennett is a friend as well as a man with whom I have had many discussions on many subjects (he knows about so many things that I find it hard to keep up and often don’t bother) though until a few weeks ago these had all been conducted on the internet. This is entirely appropriate, because Jim believes, as do most Anglospherists, that the existence of the new technology makes it possible for the Anglospheric networks to grow in parallel to official ones.

The problem we are all facing is to try to define some future role for this country. Involvement in the European Union has not been a success and neither has the EU itself.

The alternative that is sneeringly produced by Europhiles is to be a slavish follower of the United States. That is not satisfactory and the much-vaunted special relationship would not stand up to any close examination. It is a relatively new idea in history and has always depended on individual leaders. Thus, it all worked reasonably well with Reagan and Thatcher not just because the two had similar outlooks but also because the lady was not backward about coming forward when Britain’s interests were at stake.

Despite appearances, it has worked considerably less well with Bush and Blair, because the latter has not managed to use his undoubted influence in Washington wisely. The reason there is Blair’s obsession with the need to strengthen transnational governance and with American support for European integration. The latter, he believes in a rather confused fashion would bolster up his own position among the colleagues.

In 2003 Britain’s cachet in the United States was great. Blair could really have had almost anything he wanted. In fact, a Bill was introduced in the Senate that would have created a free-trade agreement between the two countries. Alas, Blair had to decline this, shamefacedly (I’d like to think) having to point out that this country had no right to negotiate international trade agreements.

What he did try to achieve was support for the European Constitution (a half-hearted one was given by the President and a considerably stronger one by State); that famous appeal to the UN before the Iraqi war, when Blair was quite clearly diddled by Chirac; and several pleas for America to sign up to Kyoto and the International Criminal Court. None of these were in either Britain’s or America’s interests.

In any case, the Blair – Bush era is coming to an end. (Despite the prevalence of the Bush Derangement Syndrome, it has to be said that he will be President for only two and a half more years.) What will happen then? Because so much depends on the individuals, that is completely unpredictable, especially as the situation is seriously complicated by the difficulties over defence matters, analyzed in great detail by my colleague. (There are too many postings to link to.)

Furthermore, a relationship between the United States and the United Kingdom is always going to be severely unequal. Not quite as unequal as it appeared recently because of Blair’s blunderings but there is no denying the fact that the US is the largest and strongest power in the world at the moment. We have to be grateful for the fact that this giant is a democracy and one that is friendly towards us, ready to help its friends.

The third possibility is the revival of the Commonwealth, discussed at length by a number of people, mostly in Britain. There are exceptions but, on the whole, the Commonwealth does not play a big part in many countries’ thinking.

There are problems with that. The Commonwealth belonged to a particular period in history just as the Common Market and the idea of European integration did. It is, as some Anglospherists put it, a creature of the machine age.

In fact, it was never really a huge success politically, though there were economic, particularly trading, aspects to it that were useful to many. All that is in the past. The big developed and developing countries of the Commonwealth have grown used to their separation from Britain in any meaningful sense of the word. Some like Australia and, to some extent, India have become major powers in their own region. They have formed their own direct links with the United States and with each other.

The idea of them going back to some arrangement whereby these links will be translated through Britain is moonshine. But it gives people pleasant dreams of grandeur. For the insistence on the Commonwealth despite all the inconsistencies and difficulties with many of its members, is another attempt to turn away from the United States and to create yet another rival, one that will restore the pre-eminent British position. Dream on.

It is fair to say that the Commonwealth links would be very useful within the Anglosphere in that they could provide a balance within these arrangements to the largest member, the United States.

Jim Bennett’s research and analysis has led him to conclude that there are various links that depend on a common language and a commonality of economic, political and legal developments. The similarities outnumber the dissimilarities to a surprising degree.

Research done by historians like Alan McFarlane and David Hackett Fischer have shown that many of these “exceptionalist” ideas, such as the importance of individual ownership of property and the existence of the nuclear family go back into the early Middle Ages in England and maybe even further.

On the other hand, most of the “distinctly American” aspects that are so disliked by many people in this country, are actually British. My own feeling is that America and Americans today are very similar to what Britain and the British were in the nineteenth century, displaying the same baffling combination of religiosity and emphasis on material well-being and development.

The arrogance of the British in that period was excoriated as widely as the American version of it is today.

So where do we go from here? To some extent, links are being forged already through the internet and, in particular, the blogosphere. It is entirely legitimate to talk about Anglospheric blogs both on the right and the left. It is also fair to note as several people did on our forum that the British blogs with a few exceptions fight shy of linking into that network. There is a deal too much navel-gazing in British politics.

This trend will continue and the links will become stronger. There are no more gatekeepers as Jim Bennett explained yesterday evening. Americans, Canadians, Australians, British, Indians and anyone else can read each other’s newspapers, websites and blogs without some editor deciding what was and what was not suitable. Technology is not likely to go back on that.

His proposal is the creation of networks of institutions that would not consider the submerging of individual countries and their differences. There are some Anglospherists who talk of a union and constitution but there is little need for that.

Free trade between the countries is merely a starting point. In any case, this is not to be limited in the mind of a free-trader to the Anglospheric countries. (Or the Commonwealth ones for that matter, though there the logic is less clear.)

Beyond that, Bennett proposes arrangements whereby citizens of the Anglosphere could travel, work and stay for various lengths of time in other Anglospheric countries without the present bureaucratic mess. (This may well cause problems as far as Britain is concerned, there being rather a large number of British citizens, who consider themselves to be jihadists.)

We come to the important issue of defence. As things stand, it is clear that there is a commonality of interest between the several Anglospheric countries and an ability to work together swiftly and efficiently. The post-tsunami effort by America, Australia, India and Japan (an honorary member) showed that clearly. And Britain’s absence showed the difficulties as far as we are concerned.

Above all, the Anglosphere is a project in development and depends largely on ideas. I am delighted to say that the Anglosphere Institute is beginning to grow and others will be established in the countries that are receptive to those ideas.

It is not unreasonable to assume that the Anglospherist ideas of democracy, individuality, small government, free economy, the common law and openness to the world will slowly become successful. As ever, the question is where will the originator of those ideas, Britain, place herself.