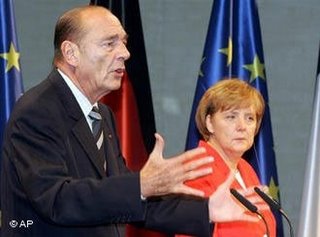 You do wonder what game little Angela is playing, as she can't be wholly for real in cosying up to Chirac over the constitution. Even she must know that L'Escroc is "dead man walking" – politically if not in actuality. Any deal she does with him isn't going to survive the presidential elections next year.

Thus to see Merkel and Chirac meeting outside Berlin – as they did yesterday – and agreeing "to create fresh solutions to resolving the EU constitutional crisis" makes you wonder what the real game is.

Anyhow, the fair Angela is suggesting – for public consumption at any rate – that "a decision should be reached" on the EU constitution when France holds the EU presidency in the second half of 2008, telling reporters that she and her new bestist friend L'Escroc had agreed that "the constitutional treaty will be reviewed during the German presidency", after a period of reflection.

Chirac, for his part, said that France "trusts the German presidency to steer the ship in the right direction," declaring which Gallic insouciance that, "We have certain problems but we will of course overcome them."