Never let it be said that the MSM is slow on the uptake so, having reported it on this blog in December last year, it is still good to see the Daily Telegraph catch up with the news today with its report headed, "Cameron drops plans to pull out of Europe's deal on fishing".

Never mind that Booker also reported it on 7 May in The Sunday Telegraph and that it appeared in last month’s edition of Freedom Today, which we also reported, this time on 30 May.

No, never mind all that. Toby Helm, Mr Chief Political Correspondent Of The Telegraph has a newspaper to fill and a mortgage to pay so, with his eye on the ball as usual, he decides it's news. And suddenly it's news. Just remember, though, you read it here first, six months ago.

In making out that it is "new" news, however, Helm must invent the fiction that – as he writes – "David Cameron has made a further dramatic break with the Tory past by dropping his party's long-standing commitment to pull Britain out of the European Union's much maligned Common Fisheries Policy."

Family blog or not, there is only one response to that: bollocks!

The man was always against the idea and there is no one in the business who did not know that, at the first available opportunity, he would junk the policy and revert to the status quo. And he did that last December. 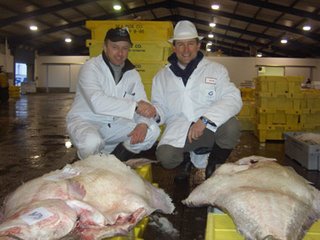 The policy, as it currently stood, represented two years of gruelling hard work and the personal commitment of then shadow fisheries minister, Owen Paterson who produced in December last a credible alternative to the CFP in the form of an opposition "green paper". That had to be personally approved by Howard and, in seeking that approval, throughout the whole process, the main obstacle was Howard's then aide, none other than Mr David Bloody Cameroon, the Boy King himself.

Furthermore, in a little piece of untold history, the only thing that forced Howard to give the go-ahead for developing the policy was the political courage of Owen Paterson and his then immediate boss, John Whittingdale. On the eve of the 2004 Euro-elections, they threatened to resign unless Howard honoured previous commitments to the fishermen on repatriation of the CFP. The resignation of two of his shadow team, on this issue, at such a critical juncture when UKIP looked like it was about to sweep the board, was potentially so damaging that he caved in and produced his "famous" 10 June letter.

It is a measure of just how little the political correspondents really know of what is going on that what amounted to a major political coup went entirely unnoticed. Nor indeed was any notice taken when the man who, by general acclaim was the best shadow fisheries minister the party had had since it went into opposition – none other than Owen Paterson – was quietly reshuffled to transport last December as a precursor to ditching the fishing policy. The Boy King knew full well that, with Paterson's personal commitment to it, had he remained in post, he would have had no alternative but to resign, seriously damaging the Boy King's fragile Eurosceptic credentials.

However, why the fishing policy was so important, and why we invested so much time and effort in it, is now only hinted at in Helm's piece, when he writes:

It is understood that Mr Cameron, who is trying to tone down his party's hostility to the EU while retaining a strong euro-sceptic edge, had been warned by colleagues and experts that withdrawal would have been unachievable without provoking a huge legal crisis in the EU.

To provoke a "huge legal crisis" was precisely the aim. Within the institutions of the European Union, the "holy grail", the one single, untouchable dogma, is the inviolability of the acquis communautaire, the principle that, once made, EU law cannot be un-made. 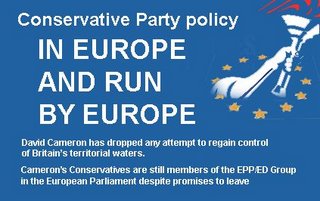 By demanding the repatriation of the CFP, a popular issue where the failure of the EU is so easily demonstrated, we were quite deliberately challenging that central dogma of the EU. By so doing, we hoped that, if successful, a precedent would be set for further unravelling a host of other issues. We even had a name for this strategy – reverse engrenage – unravelling to EU, step-by-step, after the commission's own strategy of engrenage, the step-by-step accumulation of power.

There is no doubt that the Boy King was aware of this. Advised by the "old guard" Europhiles, including Clarke, Heseltine and Gummer, he was also fully aware of the danger, which is why the repatriation commitment had to go. With it goes any shred of pretence that Cameron is in any shape or form a Eurosceptic. As we see from Hague's speech yesterday, he is a "heart of Europe" man, wholly wedded to the status quo and not in any way inclined to rock the boat.

That same day it was that the Boy King engineered yet another photo opportunity by riding his bicycle decked with an English flag. Had this charlatan shown his true colours, he should have been kitted out with the ring of stars. That, at least, would have confirmed that, as long as he is at the helm of the Conservative Party, there is no hope whatsoever of achieving any progress in the battle against Brussels.