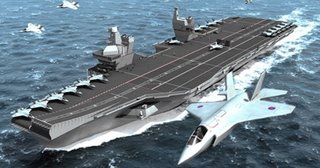 The Evening Standard last night has come up with an absolute stunner, headlined "£1bn cuts threat to defence industry".

Written by Robert Fox, he reports that the defence industry is facing up to the prospect of the first government spending cuts since Labour came to power ten years ago, retailing that under next year's Comprehensive Spending Review, the Treasury has warned that the defence budget will have to be cut.

According to Fox, this means that a number of major projects are threatened, including the plans to build two aircraft carriers.

Gordon Brown, we are told, also wants £1bn taken from defence and given to the budget for homeland security, according to Whitehall officials. Fox cites a senior official saying "It is a major defence review and cut under any other name." On the back of that, a recently retired chief of staff is also cited, commenting: "They'll have to tear up Labour's whole defence strategy and start all over again."

It appears that, ahead of the spending review to April 2008, defence chiefs have already been told that "at least one major procurement programme has to go". The most obvious candidate, say several senior officers, is the plan to build two 60,000-ton aircraft carriers, due to be commissioned in 2012 and 2015. The programme was due to go to final construction contract in October but this, at the very least, will almost certainly be postponed.

Nor, it appears, does the carnage stop there. As the costs rise of supporting and protecting the 15,000 British forces in Iraq, the Middle East and Afghanistan, other programmes will come under further Treasury scrutiny, and could be cut altogether.

Among them is the FRES programme. As we reported two weeks ago Chiefs are now considering making an off-the-shelf buy of armoured personnel and communication vehicles, rather than develop their own British system. Says one planner, "I think that would be a huge mistake as nothing available is really what we want".

Obviously the implications of all this are profound. Not least is another Blair Brown confrontation in the making. It was only last week that Blair was talking up the carrier programme with Chirac and if Brown wanted to humiliate the prime minister, scrapping or delaying the carriers seems a very public way of doing it.

Then, we see the article in The Sunday Times, the thrust of which was repeated in The Daily Mail yesterday, from Rear Admiral Chris Parry, stressing the homeland threat and the dangers of mass migration. Now, we have Brown wanting to transfer £1 billion from the defence budget to "homeland security". Was the publicity given to Parry a coincidence, or are we looking at another example of news management?

Then there is the downgrading of the FRES project. The comment of the "planner" is very, very revealing and we will post later on the technical implications.

Undoubtedly, this "bombshell" will send shock waves through the defence establishment, but it is something of a setback to Blair's ambitions to equip the armed forces for their European Rapid Reaction Force role. Is this a Eurosceptic Brown flexing his muscles?

More later, as and when more news emerges.