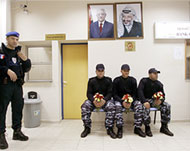 The EU is rather proud of the fact that at its last Council it still refused to give money in aid to the Palestinian Authority because of Hamas’s refusal to recognize Israel’s right to existence or to give up its terrorist attacks (some of which backfire quite literally, as the developing story of the murdered family on the Gaza beach shows).
Instead, the European Council decided to use NGOs for humanitarian purposes. This can be interpreted various ways. On the one hand, assuming the decision is put into effect, this ought to stop people, such as former President Carter (arguably the most unsuccessful incumbent of the twentieth century), complaining that the embargo put on Hamas is keeping money away from schools n’hospitals.

Then again, money seem to be available for arms, ammunition and explosives but that is not something the likes of President Carter want to think about. (We must admit that there has been a little less support for Hamas from the great and the good since they have displayed their civic spirit by fighting their rivals Fatah.)

On the other hand, there is the point that by paying for various social and humanitarian projects in Gaza, the West and the European Union, in particular makes it possible for Hamas to use the money they manage to collect otherwise for … well ….paying their civil servants, which is a large proportion of the population, their various military groups, and, presumably, buying in yet more ammunition to aim at either Israel or Fatah (or their own people, if needs be).

In other words, there is no apparent need for Hamas to develop into a real government that takes responsibility for its people and their welfare in whatever shape or form.

Arab banks have not been lending money to the organization, partly because they do not wish to incur the wrath of the Americans but, more importantly, because they do not trust Hamas either. (I don’t suppose they trust Fatah, given the fiscal record of the late unlamented Chairman Arafat and of his friends and relations.)

Some money has been collected by various Hamas ministers and spokesmen, then smuggled through the border from Egypt. Israel is not happy about it, since it has shrewd suspicion about the use that money will be put to.

Come to think of it, the EU is not happy either, and it is manning the crossing at Rafah. As the Washington Times reports:

“European monitors who have overseen the first Palestinian-controlled border terminal for the past seven months warn of unspecified "consequences" if Hamas officials don't stop smuggling millions of dollars into the territory.

Yesterday, the Gaza Strip's main international gateway was closed after the European monitors said an Israeli security alert prevented them from manning the crossing, officials said.

The Palestinian militant group Hamas said it suspected the Rafah crossing with Egypt was closed to send a message to its government to stop carrying cash by hand into Gaza to sidestep a Western aid embargo. The monitors brushed aside the accusation.”

Well, as they say, you pays your money and you takes your choice. And the money is not incosiderable, though nowhere near what Hamas says it needs to run Gaza and its people, most of whom are employed by the Authority.

“The Islamic militants paid government employees this week for the first time in almost three months after Foreign Minister Mahmoud Zahar carried $20 million across the border. Mr. Zahar's refusal to declare the cash at the Rafah terminal has alarmed Israel and triggered a protest by the European delegation.”

In fact, it was the Egyptian authorities who notified the EU border official about Mr Zahar’s interesting luggage. “But when Mr. Zahar reached the Palestinian side, the foreign minister claimed his diplomatic status granted him immunity from being searched.”

“Mr. Zahar, who later deposited the $20 million in the Palestinian treasury, was defiant. In an interview with a reporter from Israeli Channel 2, he said the Palestinians had a right to smuggle money into Gaza given the international "siege" of the territory.

The EU monitoring spokesman said that the team was concerned by that statement and was awaiting a clarification from Mr. Erekat.

Mr. Erekat said the Palestinian president, who has taken control of the Gaza crossing by deploying his presidential guard, wants to do whatever is necessary to ensure the European monitors remain at the border.”

Julio De La Guardia, the spokesman for the EU monitors has pointed out that this is not an isolated incident. “Three weeks ago, Hamas spokesman Sami Abu Zuhri smuggled $807,000 in euros across the border in a money belt.”

The money comes from various Middle Eastern countries, possibly governments, possibly individuals. There is not much the European Union can do except demanding that international standards of transparency be kept to and periodically closing the crossing, producing pictures of miserable looking Palestinians who are stuck at Rafah.