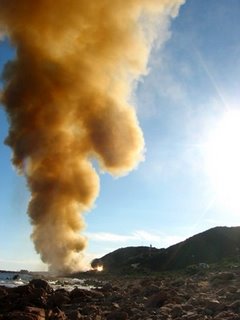 "There is the tradition of good old Europe that has made this possible," boasted Gerhard Schröder at the ceremonial unveiling of the first Airbus A380 "superjumbo" way back in January 2005.

As for Noël Forgeard, then Airbus chief executive and now CEO of EADS, he came up with what must be one of the most inane comments ever recorded. "Under the name Airbus, Europe has written one of its most beautiful pages of its history," he gushed.

And now, Schröder's "good old Europe" is back with a vengeance. Enron Airliners, aka Airbus Industries, with its self-confessed "incompetent" co-president on the EADS board, Arnaud Lagardère, is about to put its hand out for another huge dollop of public money.

This, according to IHT is being described by some analysts as "a rescue package" but it is also set to revive the bitter trans-Atlantic dispute over the government support for Airbus.

Wedded to their subsidy fixes, though, European governments are already signalling that they are considering a handout, leaving US trade negotiators to warn that any such move could lead to a full-scale battle at the WTO.

The key date is 17 July, the first day of the Farnborough Air Show, when an informal subsidy freeze ends. At that point Enron Airliners' spokesman Rainer Ohler is saying that more cash is "indispensable".

Wiser, if anonymous heads, however, are saying otherwise. With the slowdown in production, cash flow has actually eased in the short term, which means that there actually more time to settle with the US over the exact nature of the aid that could be paid – if any.

But, if the Americans relent, the butcher's bill is likely to be huge and Enron Airliners is also having to cost in plans for redesigning the A350 so it can better compete with Boeing's 787 Dreamliner. You can really see the Yanks going for that.

Noël Forgeard meanwhile – already under fire for the rather convenient dumping of some of his personal shareholdings in EADS, before the price crashed and burned - is doing his best to add fuel to the flames by implying that the company's problems are the fault of his successor at Airbus, Gustav Humbert, a German. He is also criticising the company's plant in Hamburg, blaming it for the production delays.

Thus did one government official - whose clarity of vision demanded that he too remained anonymous – declare, "the next few years will be hard for Airbus." You don't say!