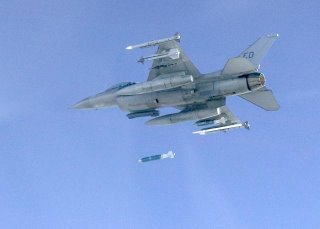 Isa Younis, a 66-year-old retired teacher, said: "I thank God and the Iraqi government for this huge gift. I don't know how I'm going to celebrate but I know that this is the happiest day of my life."

"I'm overjoyed. God willing this will be the end of all terrorists. I hope Iraq can now begin to stabilise now this pig is dead," said Qeysar Ahmed, a Baghdad shop owner as he watched Prime Minister Nuri al-Maliki make the announcement in a televised news conference accompanied by U.S. officials.

Those comments come from the Reuters report, and there is a lot more in similar vein, celebrating the death of the head-hacker in chief Abu Musab al-Zarqawi, al Qaeda leader in Iraq.

In a triumphant demonstration of intelligence combined with air power, Reuters also reports Major General William Caldwell telling a news conference that it took detailed planning before two F-16 fighter jets dropped two 500-pound (227 kg) bombs on a house in a village north of Baghdad and killed the most wanted man in Iraq. 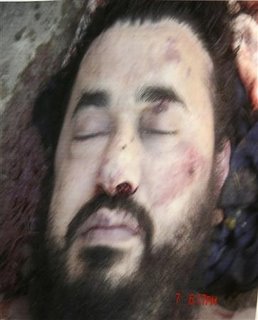 He said that U.S. forces were trailing Sheikh Abdul-Rahman, Zarqawi's spiritual adviser, and that led them to a small house in a palm grove area where they also discovered the al Qaeda leader was staying. The bombing started at 1815 (1415 GMT) on Wednesday, he said.

"What everyone needs to understand is the strike last night did not occur in a 24-hour period. It truly was a very long, painstaking, deliberate exploitation of intelligence, information gathering, human sources, electronics, signal intelligence that was done over a period of time, many, many weeks," Caldwell said.

There were six people in the house, including a woman and a child, but only Zarqawi and Abdul-Rahman have been identified. Zarqawi's identification was verified at 0330 on Thursday (1130 GMT), Caldwell said. Forensic experts are conducting a DNA test on Zarqawi and results are expected in 48 hours, he said. Caldwell displayed at the news conference what he said was a picture of the corpse of the bearded Zarqawi with his eyes shut.

He said 17 more raids were conducted on other suspected hideouts for Zarqawi associates in Baghdad and its outskirts a few hours after he was killed. They produced a "treasure trove" of information.

Just for once, there is little need to add to these reports.