The mean streets of Basra 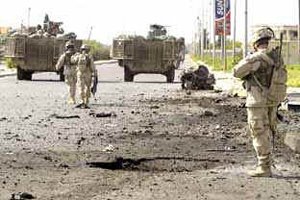 Today, there is a defence debate in the Lords. It will be the first opportunity for Lord Astor, the Conservative defence spokesman, to challenge Lord Drayson over his egregious lie about the British Army having used RG-31s before, and to question him on his claim that, "The RG-31 cannot access areas that Snatch Land Rovers can get to."

The relative size of the two vehicles has been something of a preoccupation with some contributors to the unofficial Army forum , where an extremely robust discussion has developed over the utility of the "Snatch" Land Rovers.

Given that the Land Rover weighs in at just under six feet and the RG-31 at just over eight, we were keen to know how many of the mean streets of Basra were actually so narrow that only a Land Rover could squeeze down them. Visiting the area, obviously, is out of the question – and even Lord Astor has not been permitted to go – but, thanks to the wonders of the internet, we have been able to take a "virtual tour" of the city and are able to present the results here.

That said, the first picture (top left), although it came up in a search for Basra, clearly is not a view of that city. The troops are obviously American and the vehicles in the background look very much like Strykers. The picture has a value though in that it shows the aftermath of a car bomb, with the crater in the foreground and the wreckage of the car in the near distance. It demonstrates that the terrorists by no means confine their activities to the narrow side-streets. 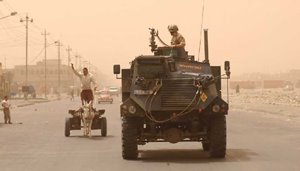 The next picture (right) most definitely is Basra though and the vehicle in the centre ground is a Saxon APC (now withdrawn from Basra). At just under an inch wider than the RG-31, you can see what a tight squeeze the RG-31 would have, hence the difficulty the "suicide donkey" (presumably) is having overtaking the vehicle. 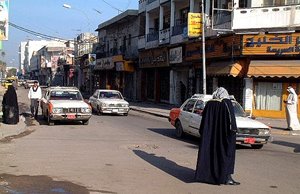 Getting narrower is the next street (left) but, easily able to accommodate two cars with plenty of room to spare, it would no doubt permit passage of a Land Rover. In what looks like a one-way street (but you never know), we think and RG-31 might just be able to squeeze by, which seems to put Lord Drayson's claim rather to the test once more. The parking of the car on the left, incidentally, does not seem too brilliant. 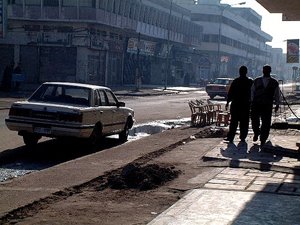 About this cityscape (right) I am not certain it is Basra – it looks a bit like Baghdad to me. No doubt someone will correct me. In the foreground is what looks somewhat like a bomb crater, but it could be just disrepair. Again though, the Land Rover would have no difficulty traversing the road but it would be also very hard to imagine that the RG-31 could have a problem. We cannot vouch for the side streets though, as the views of them are not clear. 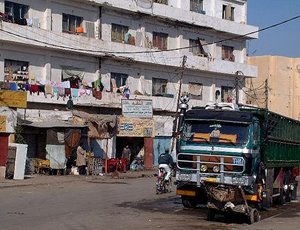 In this road scene (left), some sense of scale is given by the massive six-wheeler truck, giving the road-width – at a rough estimate – of something three times the width of the truck. Even allowing for the bicycle, we assume, therefore, that a Land Rover could squeeze past, but is this yet another of those "narrow" roads where an RG-31 would have difficulty getting down? Note again the parking technique – this does not seem to be the Iraqis' forte. 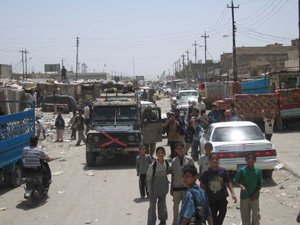 Here, we do not have to guess about the Land Rover (right) – a "Snatch" is parked centre picture, with its door open. This is the Coldstream Guards on patrol, doing their "hearts and minds" bit, and very good at it they seem, to judge from the crowd of children around and in front of it. The truck to one side and the car to the other (badly parked), and the spacing, however, does seem to suggest that an RG-31 could just about squeeze past. Whether the motorcyclist would have such an easy passage is anyone's guess. 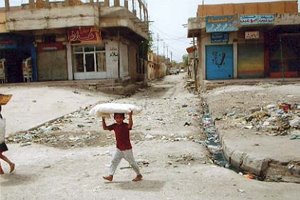 This (left) is the best I can do for a view of a side-street. If there was an IED around, it could well be embedded in the trash-filled gutter – a favourite hiding place for the terrorists and totally invisible to any passing patrol. The street itself does look narrow but, in the distance, you can see what appears to be a parked car, giving some sense of scale. From the look of the approach, a Land Rover would have no problem. An RG-31 might have difficulty squeezing past the car, but would any mounted patrol really want to go down this road where there could so easily be an ambush? 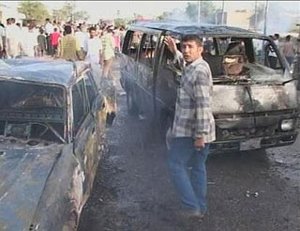 The right-hand scene is for real, where a bomb has gone off. The van to the right has been caught in the blast and has been burnt out. The structure, however, looks relatively intact so a passing "Snatch" Land Rover might just have survived the blast. In an RG-31, however, that survival would have been more certain and, from the look of the spacing, it would have been able to have driven down the road without too much difficulty. 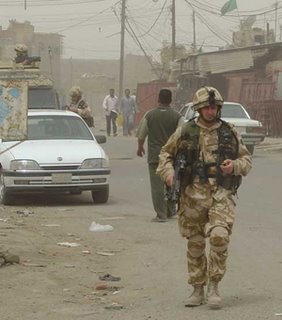 On the left, we have another Coldstream Guard patrol. You can see the "Snatch" on the left, behind the parked car, with the "top cover" – the Americans call them "sky guards" – aiming his weapon up the street, giving cover to the soldier on foot, the so-called "dismount".

Once again, the vehicles give a sense of scale, the road measuring at least four car-widths, but probably wider. Clearly, the Land Rover had no problems navigating the road and, once again it is very hard to see how an RG-31 would have had any difficulty. Another one for Lord Drayson to explain? 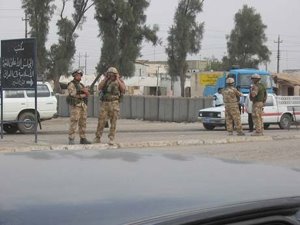 The photograph on the right, taken over the top of a parked car, shows a group of British soldiers, so this is obviously – at the time, at least – a patrolled area. There is no sign of a patrol vehicle, but the centre strip shows the road to be a dual carriageway and the truck parked off-road to the right suggests that large vehicles can navigate the road. One senses, therefore, that an RG-31 might not have too much difficulty. 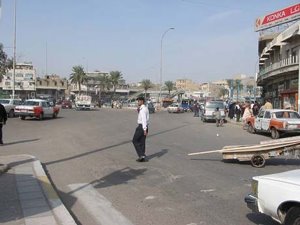 I think I recognise the road (left) from scenes on television, and recall seeing a film of a convoy of "Snatch" Land Rovers led by a Warrior hammering down this road. Not in your wildest imagination could you argue that an RG-31 would have difficulty here, so this is yet another bit of road where Drayson's preference for Land Rovers does not seem to stand up. Down here, you could line up half the Army's complement of tank transporters. 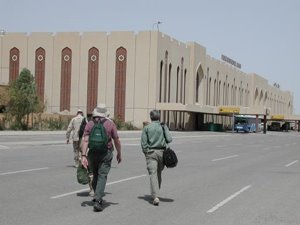 And, on the right – if this really is Basra and not Heathrow airport or somewhere else - we could land a Jumbo Jet, or even an Airbus A380, and have room to spare. No doubt, someone will tell me if this is not Basra, but even then it is difficult to see where the "nasties" might hide an IED. But not even Drayson, I imagine, would try arguing that an RG-31 would have difficulties travelling down this road. 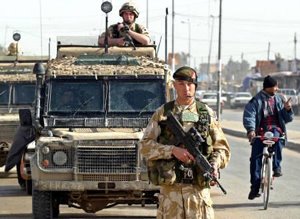 Another day, another patrol (left) – a convoy of "Snatch" Land Rovers, with a "dismount" in front and another "top guard" covering him. This is yet another dual carriageway and you can see from the way that the Land Rovers are staggered, rather than directly in line, that there is plenty of room on the road. Once again, therefore, we have a patrol area where an RG-31 would have little problem and if, as appears from the picture, there is a car tucked in between the Land Rovers, a potential suicide bomber, the troops would definitely be safer in the better-protected vehicle. 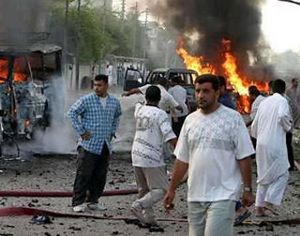 Another one, "for real" (right). This is another bomb explosion in a busy thoroughfare, with considerable damage evident to vehicles. One again these are civilian vehicles and the one on the left is not totally destroyed, again suggesting that the blast would have been survivable at that distance, more so in an RG-31 than a "Snatch". Despite the crowds of people, the width of the road is clearly evident and the snaking hoses suggest a fire engine in the near vicinity. An RG-31 would not have had any difficulties passing down this road. 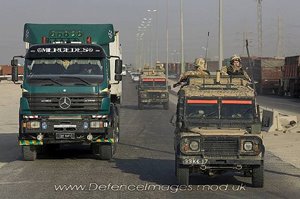 We've used this photograph before (left) - an offical MoD photograph, showing "Snatch" Land Rovers on patrol. Clearly this is a main road and the volume of truck traffic, and the spacing between the Land Rovers and the trucks easily demonstrates that an RG-31 would have absolutely no problem navigating this road - yet another route knocked off Lord Drayson's list. 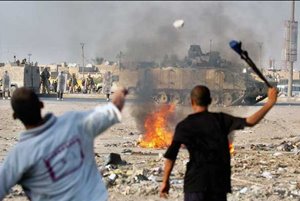 And finally... (right) this is the scene of the famous Basra riot, where the graphic scenes were flashed across the world of British soldiers spilling from a burning Warrior with their bodies wreathed in flames. You can see a "Snatch" to the left of the picture and a Warrior centre-right of picture. And, where a Warrior can go, an RG-31 at less than half the width, can easily follow. Note also, the youths are attacking the Warrior - the more aggressive-looking vehicle - and ignoring the "Snatch". Would they have attacked a convoy of RG-31s?

Anyhow, this is the best I could do with my "vitual tour". No doubt there are streets in Basra down which an RG-31 could not pass, but then would you want to drive a Land Rover down a potentially dangerous road where you have only one foot clearance down each side? But that apart, if there are such roads where only Land Rovers can travel, clearly there are many routes which are accessible to the larger vehicle. It would be absurd to suggest that, because some roads might be inaccessible, then only Land Rovers should be used for all of them. But that, effectively, seems to be what the Minister is saying.