Defence – where the debate should lie 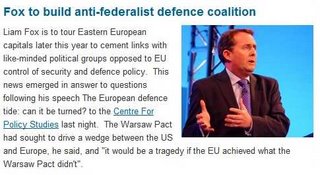 It is just the way it stacks up. Liam Fox, the shadow secretary of state for defence gave a speech on the "Europeanisation of Defence" at the Centre for Policy Studies last night and, although it unbalances the blog somewhat – with rather a heavy concentration on defence issues recently – this is something which we cannot ignore.

The Tory Boy Blog got to it first with its own commentary and the view seems to be that it was "a thoughtful and well-balanced speech". For my own part, I have to disagree with the blog author. Much as I would very much like to see a coherent defence policy from the Conservatives, I found Fox's speech horribly superficial, demonstrating an almost complete lack of understanding of the core issues and strategic developments. As a result, it lacked clear (or any) substantive conclusions or direction.

The man starts well enough, pointing out that there are three distinct problems we must consider in relation to European defence co-operation: defence expenditure, foreign policy and democratic accountability.

The first, inevitably, is a given – in that our defence capabilities and therefore policy in general are inevitably determined by what we are prepared to pay, or are capable of paying. As to foreign policy, Fox rightly says, "Defence policy follows foreign policy...". From thereon, however, it is all downhill.

The problem is that Fox does not even begin to define our foreign policy interests, where they have a defence interface, which is probably why he ends up with a curiously flat speech, so lacking in substance.

Arguably, in the context of limited funding, the central issue is that we are pursuing two fundamentally incompatible defence strategies in pursuit of two entirely different foreign policy objectives. The first is supporting the US in Iraq and Afghanistan, prosecuting the "war on terror". The second is the building up an air-portable expeditionary force, primarily to fulfil our commitment to the EU's European Rapid Reaction Force – although this force is "double hatted" and can be used for Nato tasks or with ad hoc multinational alliances.

Failing to make that distinction, Fox blathered on about the European Defence Agency, Nato co-operation and sundry other matters, but what he really did not address was that the shoe is already pinching badly. The problem is that force structures, equipment and tactics required for each of our two objectives are fundamentally different. Given our current defence budget – which Fox shows no inclination to increase – we simply cannot do both simultaneously and well.

This is coming over with increasing clarity from the situation in Iraq. As the experience of Viet Nam adequately demonstrates, once the flow of body bags reaches a certain level, deployment of troops on extended foreign campaigns becomes politically unsustainable, even if the military objectives are achievable. Thus, the political need is for a heavy investment in force protection, to keep down casualties to a tolerable level.

Not only did Fox fail to address that issue, he failed also to acknowledge that the bulk of our procurement funds are already being devoted to fulfilling our commitment to the European/Nato Rapid Reaction Force, which means that the finance is not available properly to equip our forces in existing theatres.

Thus, his central argument that "Nato remains the cornerstone of our defence" is actually irrelevant or, at least, downstream. Both the EU and Nato are competing over the same strategic vision – air-mobile expeditionary forces, able to respond at short notice to crises but equipped only for short-term deployment.

Fox, it seems, want to argue that the force should be dedicated to Nato rather than the EU, but the current demand is for forces equipped and structured for the counter-insurgency role. In layman's terms, I suppose the difference is that, in expeditionary warfare, we move in to beat up the natives while, in counter-insurgency, we stay still and they beat us up. In the latter, the emphasis needs to be on heavy armour for force protection, with forces engaged in long-term action which might extend to decades. In this, the question of EU or Nato does not really arise. The more urgent question is whether we go for "counter-insurgency" or an "expeditionary force". Only if we chose the latter does the EU-Nato issue really become central.

As it stands, in trying to satisfy all demands – which is what Blair is attempting to do - we potentially end up with a dangerously inadequate expeditionary force – whether it is tasked to the EU's ERRF or to Nato - while our forces in Iraq and Afghanistan are undermanned and ill-equipped, because we are devoting so much funding to building up the rapid reaction capability.

We are at risk, therefore, of performing all tasks badly and, in the context of our unwillingness to increase defence spending, the crucial issue must be where we put our resource. That is where the debate should lie, and one which Fox completely ignored (or missed). And, despite the indifference and the ignorance of the media, it is a debate which must eventually dominate.