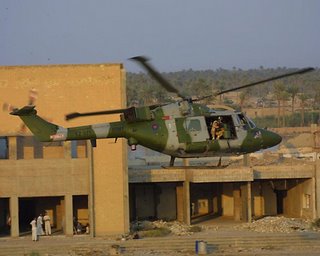 A critical shortage of battlefield helicopters reported last year is to remain, year while the MoD commits to a long-term £1 billion project to buy 70 helicopters – averaging £14.2 million each – which will not be in service until 2014. This is at a time when the Army is down to six Lynx multi-role tactical helicopters in the whole of Iraq and desperately needs more capability.

The Americans, on the other hand, are paying in the order of £3.6 million each for their OH-58D Kiowa Warrior armed reconnaissance helicopters, which are providing invaluable service in supporting US troops in Iraqi counter-insurgency operations.

Their value has been graphically recorded by the award-winning free-lance war correspondent, Michael Yon, who writes of his first-hand experience as an embedded reporter in some of the "hottest" areas of Iraq. Of the Kiowa, in the battle for Mosul, he wrote: 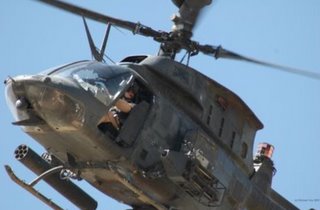 Intelligence warned that another car bomb was looking for us, so the soldiers decided to go hunting for it. American helicopters were helping with the search and a Kiowa flew so low that we could literally have hit it with a rock at times. By flying so low they can spot threats to us, but the danger to the pilots is severe: for instance, a Kiowa was just shot down near Baquba, killing two Americans. One of the helicopters with us started taking fire. I heard a pilot on the radio asking if we needed him, he wanted to land, check for holes quickly and get back in the air. A soldier said to me, "I love those guys".

More generally, he posted another account where he describes how soldiers on the ground hold their helicopter pilots in extreme regard, writing, "I've never heard a real combat soldier calling pilots 'fly boys' or anything disrespectful." "Sometimes," he adds, "they fly so low they are practically lawnmowers. One Kiowa pilot came so low that I could read the time on his watch in the photograph. I was not using a telephoto lens. Just a 50mm prime."

This is highly relevant to the current controversy about the inadequacies of Snatch Land Rovers as even the most ardent advocate of better armour protection for our troops will agree that any effective strategy for defeating the insurgents is multi-tiered. And there are few better weapons than light tactical helicopters which can escort patrols and convoys, scouting ahead to warn of potential ambushes and to attack insurgents when they break cover. 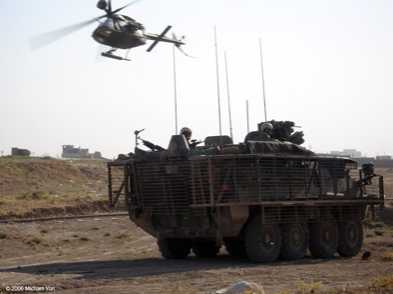 When the shortage of helicopters was again raised in the House of Lords by Viscount Brookeborough in May this year, he noted that, at the height of the troubles in Northern Ireland, we had 72 helicopters in operation in the province.

Lord Drayson – none other than he – denied that there was a shortage of helicopters, only then revealing that the total number of helicopters in Iraq was two Chinooks, eight Sea Kings, seven Merlins, five Pumas and six Lynx, 28 in total, with all but six being transport helicopters.

However, what we once again see with this MoD contract is "jam tomorrow" and nothing today. The new helicopters will be a central component of the EU's fantasy European Rapid Reaction Force and, in good European style, will be built by the Italian owned Finmeccanica subsidiary AgustaWestland. But when it comes to the real army, currently engaged in combat, the troops must go begging.

Kiowa photographs stolen from Michael Yon, for which theft he will undoubtedly sue me.