What next for the Western alliance? 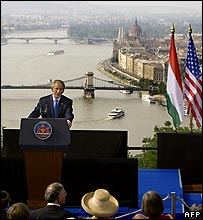 Arguably, the EU-US Summit is not the world’s most exciting occurrence and little was expected from the one that has just taken place. Presumably, this was Bush’s last EU summit for, as I keep saying, Bush Derangement Syndrome notwithstanding, his presidency is due to end on December 31, 2008.

It was, somehow, symbolic that he should arrive in Vienna the day after the horribly mutilated bodies of two American servicemen had been found with the supposed new leader of al-Qaeda, Abu Ayyub al-Masri, announcing that he had carried out the torture and murder personally.

Naturally enough this was not mentioned by the various European politicians, who had been expected to spend a lot of time demanding that Guantanamo be closed. Or so the BBC surmised.

Others preferred to think that there would be problems over the handling of Iran, though there is now a general agreement that the country is itself a problem and dealing with it might be more painful and difficult than it would have been, had the EU3 (France, Germany and the UK) had taken a tougher line at the start of the drawn out and rather one-sided negotiations, several years ago.

The solution may well lie with the people of Iran, who have been considerably more angry and rebellious in the last few months than the British media had bothered to report.

In the event, the final communiqué of 16 pages produced a great deal of well-meaning waffle and little of substance. Much to some commentators’ despair, the press conference appeared to be considerably more relaxed and friendly than the average event of that kind after a European Council. President Bush seems to have disarmed the Europeans in some way or, possibly, there has been realization that these summits (two so far) are not of any use to anybody and the detailed negotiations on many differing subjects will be more important.

President Bush then showed his remarkable good sense by going to Budapest from Vienna, to commemorate the fiftieth anniversary of the 1956 revolution. In actual fact, the commemoration is due in October but the President has explained that he will not have time to go then so, an early visit is better than none at all. He has clearly been bitten by the bug of Hungarophilia.

At the open air meeting by the Castle, Bush has extolled Hungary’s fight for her national and political freedom, adding that Iraq will follow in Hungary’s footsteps:

“"The lesson of the Hungarian experience is clear - liberty can be delayed but it cannot be denied," Mr Bush told an audience at a ceremony on a hill overlooking Budapest from which Soviet tanks had fired into the city.

But, he said, Iraq's democracy was still under threat from "determined enemies".

"Defeating these enemies will require sacrifices and continued patience, the kind of patience the good people of Hungary displayed after 1956," he said.”

It is likely that there were some more practical discussions of the kind that summits do not cover, for instance about the question of entry visas into the United States for Hungarian visitors.

Meanwhile, we saw the usual parade of self-important demonstrators in Vienna, who maintained with quite unbelievable stupidity and ignorance that President Bush was the No1 terrorist in the world. They even imported the Moonbat Mom, Cindy Sheehan, for the purpose. (One would like to know who pays for the lady’s endless criss-crossing of the world. What of the environmental implications?)

The Wall Street Journal Europe published two opinion pieces on the subject of America and Europe (and, even, the rest of the world). Unfortunately, they are both for subscribers only, which is something of a mistake in my opinion. However, the more interesting of the two, Yves Roucaute’s “With Friends Like This”, seems to be a translation of a piece he had previously published in Figaro, which was roughly translated by Joe Noory on No Pasarán.

The less interesting one is by Robert Kagan a far-from-Republican analyst and Senior Associate at the Carnegie Endowment for International Peace. Entitling his piece “On Hating America” he explains quite clearly that, much as he disagrees with President Bush and his foreign policy, he has to admit that the present much-hyped world-wide hatred of America has little to do with either. It did not start with Bush’s presidency and will not end with it.

It is, in fact, a symbol of many frustrations that people feel about their own governments and countries but prefer not to express.

Kagan describes a panel discussion he took part in recently in London about civil conflict and “failed states” around the world.

“The panelists included the son of a famous African liberation-leader-turned-dictator, the former leader of a South American guerrilla group, a Pakistani journalist, a U.N. official and the head of a of a nongovernmental humanitarian organization. Naturally, our reasoned and learned discussion quickly transmogrified into an extended round-robin denunciation of American foreign policy.”

As Kagan tells it, even the panel chairman was moved to protest but one also wonders to what extent he himself was stunned. It is not unusual for right-on anti-Bush, anti-Republican Americans to feel that they have much in common with the critics, only to find that they are lumped together with their enemies as those American imperialists.

The conclusions seemed to be (and, apparently the son of the African dictator was particularly voluble) that failed states were all America’s fault either because it intervened, as it did to sort out the mess in the disintegrating Yugoslavia or because it did not as in the bloody massacres of Rwanda.

Kagan’s summing up consists of contradictions:

“No one should lightly dismiss the current hostility toward the U.S. International legitimacy matters. It is important in itself, and it affects others, willingness to work with America. But neither should the U.S. be paralyzed by the unavoidable resentments that its power creates. If Americans refrained from action out of fear that others around the world would be angry with them, then they would never act. And count on it: they’d blame America for that, too.”

Who provides that international legitimacy? African dictators and their spoilt, corrupt offspring? Latin American guerrilla leaders, with bloody hands? Or those Europeans who refuse to acknowledge that another great fight is going on, in which liberal democracies must defend themselves, and continue to attack the greatest and strongest of those democracies?

It is the latter that are the subject of Yves Roucaute’s article. M Roucaute is a professor of political science and philosophy at Nanterre University and author of numerous books and articles.

His article is uncompromising, starting as it does with the following sentences:

“The old continent is wilting in the global war against terror, just as it did when faced off against fascism and then communism.” When at today’s summit with U.S. President George W. Bush the European Union will once again take its ally to task over Guantanamo, it will expose its own, not America’s, most serious moral crisis of the post-Cold War era.”

Professor Roucaute pours scorn on all the complaints about Guantanamo, pointing out that prisoners of war had always been kept incarcerated, away from their possible friends to prevent information filtering out.

He is not impressed by the accusations of torture:

“But where is the evidence of torture in Guantanamo? The famous incriminating report of the U.N. Commission on Human Rights, whose members include communist China, Castro’s Cuba and Wahhabi Saudi Arabia among others, was based purely on the testimony of released Islamists. Not one member of the commission even visited the camp, under the pretext that they couldn’t question prisoners in private.”

He dismisses the ludicrous docu-fiction “The Road to Guantanamo” that, inevitably, won the Silver Bear at the 2006 Berlin Film Festival. The three “innocent” heroes, who, having allegedly left Britain to go to a wedding in Karachi, somehow or other found themselves first in an al-Qaeda command centre in Kandahar, 1,200 kilometres away, then in Kabul with the Taleban and then on the Pakistani border. Too much stag night celebration, perhaps.

To top it all, they managed to be subjected to all kinds of poorly described torture, none of which left a single mark on their bodies. A tad different from people who come out from other Cuban prisons, the ones under Castro’s regime.

The three Guantanamo suicides do not point the way to anything.

“Did we have to release Nazi leaders after the suicide of Göring? Did we have to close German prisons after the suicides of Rudolf Hess or the Baader-Meinhof group? Should French prisons be closed because 115 prisoners took their lives in 2004 alone? Well, some of them actually should. Many French prisons and detention centres for asylum seekers are truly horrific. But they are of little concern to the anti-American demagogues”

We, too, have written about the horror of the French detention centres. And we, too, have pointed out that the West should look around and see more clearly who the real enemy is.

We are not saying that no American policy or American politician, should ever be criticized. We are, however, saying that the world is divided into those countries that, theoretically at least, believe in freedom and those who do not. We should be fighting for our freedom and trying to spread it to those countries whose people suffer from tyranny. Let us not forget that the courageous Hungarians received no help from the West.

The world is also bedevilled by transnational organizations, whose aim it is to undermine liberal democracies and impose a rule by unelected and unaccountable lawyers and bureaucrats. Their greatest enemy is the United States. We, British and Europeans, should be lining up with the latter.

“The real strength of republics must be measured by the courage to fight for them. On this side of the Atlantic, this strength, once again, is lacking.”

Professor Roucaute is talking of Kantian republics, which European countries ought to belong to and ought to fight for.