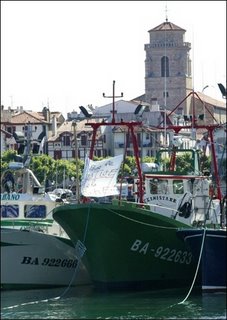 From AFP, via L'Ombre de l'Olivier and Yahoo France comes a sorry little tale about French fishermen at odds with each other.

These are the anchovy fishermen of south-western port of Saint-Jean-of-Luz who, confronted with a dramatic fall in their catches and "unsuited" EU rules, the small anchovy fishermen have blockaded the port. Their target is the larger "industrial" vessels, after a "vertiginous fall" in anchovy catches in the Bay of Biscay.

After what the skipper of the Eperantza II calls "true carnage" for 20 or 30 years, the EU finally moved last year to ban industrial fishing in the last half of 2005, but has permitted it to re-commence in March this year. But the small fishermen believe that six month's suspension are not long enough for the stocks to recover, putting at risk the livelihoods of about fifty fishermen working from ten small vessels.

They also complain that while they are bound by EU rules which impose a minimum of about five inches, resulting in much of their catches being discarded, the industrial fishery is able to circumvent these by applying an average size rule.

Thus do the small fishermen regard themselves as "more virtuous" yet they are more heavily penalised than the industrial fishermen. In this, it seems, they have the support of their Spanish equivalents across the border, who are also calling for industrial fishing to be halted.

In days of yore, of course, the French could always march on Paris, and the Spanish on Madrid, but Brussels is a long way away, with the fisheries directorate presided over by a Maltese who clearly isn't listening. So, for the moment, as the blockade tightens, it's become a Frog eats Frog situation.