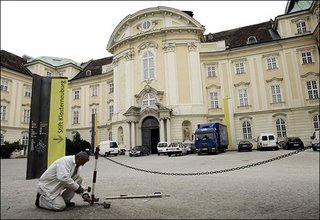 The BBC website has picked up on the weekend meeting of the foreign ministers of the EU member states.

In a curiously flat week for EU events, it has little else to report - unless you want to get excited about the EU parliament discussing the taxation of sms messages. It thus makes the most of the spectacle of ministers meeting in the 900-year-old Klosterneuburg Abbey, "to debate ways of making Europe function better".

If you had any doubts that this is empty rhetoric, all you need to do is read our earlier post on the Restriction of Hazardous Substances Directive.

You really, really do wonder about these people. They bring out an insane law – this one which is estimated to add £50 to the cost of a desktop computer, while reducing its reliability – and then they closet themselves in some grand Austrian abbey to prattle on about how to "re-engage" with "European citizens".

Any how, it looks like Austrian foreign minister, Ursula Plassnik, prattler-in-chief want to sidestep discussions on the EU constitution, and wants everyone to focus on "steps that can be taken independently". These now include, "better crisis management, more consular co-operation, better lawmaking and more transparency... in the union's decision-making process".

The constitution, it seems, can wait until next month’s European Council, when another "road map" will be presented to the members. One hopes, for their sake, that they are not relying on Galileo for navigation.

For the moment, though, much is being made of "transparency". Personally, I would prefer invisibility, not like this, but the sort that comes when they shoot off to another planet, which is where the "colleagues" undoubtedly belong.