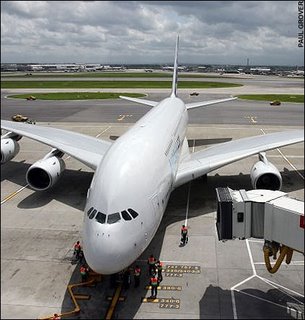 Although we covered the arrival yesterday of the A380 at Heathrow fairly comprehensively, we cannot resist commenting on the editorial marking the event in The Independent today (subscription only). The relevant part reads:

The completion of the A380 also gainsays the pervasive doom-mongering about the European Union. Airbus is one of the EU's great successes. That the consortium has brought this ambitious project to fruition shows that the sometimes quarrelsome Europeans are capable of impressive co-operation when they put their minds to it. For all the logistical problems of assembling components in so many countries so far apart, Airbus has also proved itself competitive. So far, 16 firms have placed orders, including Virgin Atlantic.

What is remarkable here is the pathetic attempt by this Europhile paper to attach the Airbus project to the EU, and to make out that it is a product of that political construct which, currently, comprises 25 member states.

The Airbus consortium is, in fact, comprised of industrial partners from four member states, France, Germany, Spain and the United Kingdom – soon to be three with the departure of BAE Systems. Thus, whether it is a "success" or not – and the jury is very much out on that – it has nothing to do with the EU.

This is trouble with the Europhiles. So devoid of real success (or any) is the EU that they grasp at any passing straws, desperate to show the utility of their construct. In inhabiting that little fantasy world of their own creation, however, they are completely detached from reality.

It is, therefore, not possible to have any engagement with them. The only useful strategy is to adopt the Harrison Ford solution.