Of rumours dark and devious 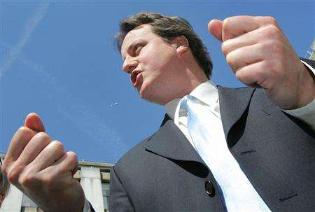 Matthew Parris in The Times today argues that the Boy King and his pals, far from sliding towards the centre in all things, have in matters of foreign and defence policy shifted the opposition to the right.

He thus asserts that we could be just a few years from a Cabinet in which the prime minister, the foreign and defence secretaries and the chancellor are to the right of Margaret Thatcher in their view of Britain's place in the world, in what he calls a "Europe-hating and Pentagon-loving party".

Parris cites a number of speeches and events to support his thesis, which are worth having a look at. For myself, I am not at all convinced. We are all too old and wise to rely on hints, innuendo and reading the runes. When you are dealing with politicians, and especially Tory leaders, you watch their hands, not their lips. And their hands are not reaching across the Atlantic.

That said, The Scotsman is retailing a Reuters report that tells us the Conservative Party has ignored a last-ditch attempt to put off their exit from the EPP, and are ready to form a new political grouping in the EU parliament. According to a "senior party source", the deal is all but done, even if the final move may have to wait until after the summer, for administration reasons.

The Conservative Home site chews over the details, which leave the editor less than impressed. "The Tory leader must not think delivery on the EPP pledge will satisfy the demands of Britain's Eurosceptic majority," he writes. "In itself it will do nothing to restore powers to Britain. 87 percent of Tory members want the European Union to return responsibility for fishing and aid policies to member states and, in good time, Mr Cameron's new grouping must lead calls for such repatriations of power."

That, rather than the vapourings picked up by Matthew Parris, will be acid test and there is no sign at all that the Boy is prepared to take it on board.

There are, however, some dark rumours which if true, could change the political dynamics. According to one "highly placed source", the current leader of the UKIP MEP group, Nigel Farage, is to make a bid for leadership of the party, whence he and a small-group of like-minded MEPs intend to defect to the Tories.

This would not be the first time Farage has considered defection and now – as then – his problem could be that the Tories themselves would not entertain the switch. But, should details of any deal – even if not fulfilled – become officially known, they could have considerable ramifications for both parties. For the moment though, we are dealing with rumours – about as firm as the idea that Cameron is a Eurosceptic.