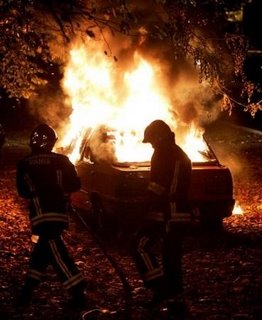 This time it is not the spoilt youth of the Sorbonne and other universities, afraid that their supposedly cushy future might become a little less so through a very small reform, who are rioting. No, we are back with the banlieux.

Cars were burned yesterday at two Paris suburbs: Seine-Saint-Denis and Clichy-Sous-Bois. According to Reuters:

“The youths began burning cars in reaction to a police operation in which a young man was arrested several hours earlier. Officials said they did not yet know how many cars had been burned.”

The last time the banlieux indulged in carbecues there was a concerted rush by some politicians (de Villepin and Sarkozy) to make statements and propose solutions to the seemingly intractable social and economic problems.

As we know de Villepin’s solution, a half-baked piece of legislation, died in the subsequent demonstrations and genteel riots.

Sarkozy’s solution, a revamped immigration law, is still going through the legislative process but is, in any case, unlikely to do anything for those already in the country and unable to get jobs because of the existing high unemployment.

We shall just have to see whether this was little more than an extension of the usual week-end entertainment or the start of a long hot summer around Paris.