How different from the political life we know 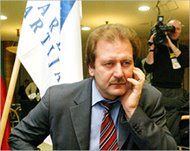 With the Polish coalition just about in place and the perspective of it collapsing within the next 6 months ever higher; with the two main parties neck and neck just a few days before the Czech elections and, thus, probably producing a result that will necessitate another election within a year; we can now look at what is happening in Lithuania.

To paraphrase “Guys and Dolls”: I’ll tell you what’s happening in Lithuania. The government that was set to run the country for a while has collapsed because of accusations of financial misdemeanour.

As Al-Jazeera put it:

“The crisis was triggered by allegations of the misuse of party and state funds by senior Labour party figures. The health minister told BNS on Tuesday he had spent party funds on repairing his car after a crash.

The Labour Party is having its party financing investigated and President Valdas Adamkus has said that he does not trust two of its ministers. So they took their bats home. Well, actually, they just resigned from the coalition government, just as the New Party had done in April.

“Valdas Adamkus, the Lithuanian president, said on Tuesday that he had lost confidence in the two ministers, both from the Labour party whose leader, Viktor Uspaskich (pictured above), a Russian-born businessman and former energy trader, was forced to resign from his post of economy minister last year because of a breach of ethics rules.

Uspaskich, who has investments in agriculture, is known throughout Lithuania as the Gherkin King.”

So Prime Minister Algirdas Brazauskas has announced that he can no longer carry on and the entire government has resigned. There will now follow weeks of negotiations and attempts at agreement, possibly even an election.

This is the 13th government of Lithuania since 1991. If nothing else, the new EU members are proving beyond any doubt that a country can function reasonably well without any government.