The stench of hypocrisy 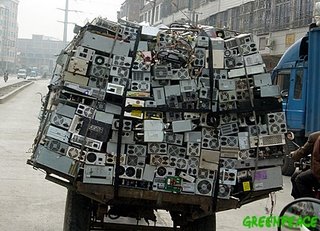 I was quietly pleased to see the front-page story on the Sunday Telegraph reporting that "green bin rounds" were leaving dustmen "black and blue".

Unions for refuse collectors, it seems, are threatening to strike over what they say is a rising tide of violence that has seen one in five of Britain's 40,000 binmen injured in physical attacks at work and more than two thirds verbally abused.

They blame the violence on growing frustration with complex regulations requiring people to minimise waste and separate recyclable materials. If households fail to sort their waste or put out too much, binmen are ordered not to take it.

Following on from our piece the day before, which also deal with the upsurge in violence resulting from the frustrations arising from increased controls over waste disposal, this story sort of re-affirms our own news values and our ability to spot a good story.

Continuing in "preen mode" (we don't do it very often), we note, however, that The Sunday Telegraph – like the Telegraph and Argus the day before – failed to pick up on the EU link, and thus failed to remind us that the bulk of the petty restrictions stem from the implementation of EU law on landfill and recycling.

Regular readers of this Blog will have noted that we have dealt with this issue not infrequently and this is the latest chapter in the growing disaster of our "green" waste policy, the full nature of which is only beginning to dawn on the wider population. It will not fully impact, though, until the bills start mounting, estimated at £10 billion for infrastructure alone with a further £5-8 billion a year in running costs.

But what we find so loathsome about this whole issue is that, while faux greenies like the Boy King prate about recycling, and boasted over the local election campaign that Conservative councils had higher recyling rates than Labour boroughs, few people are asking about what happens to the "recycled" material. 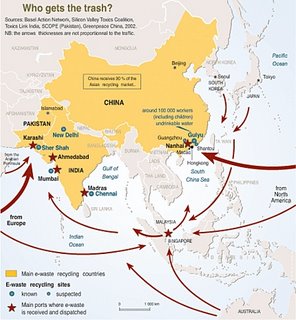 One newspaper, to give it its due, which has been following the trail is The Guardian which, as early as September 2004, was reporting on how more than a third of the waste paper and plastic collected by British local authorities, supermarkets and businesses was being sent 8,000 miles to China for disposal.

Then, exports to China were running at 200,000 tons of plastic rubbish and 500,000 tons of paper and cardboard a year, and all the indications are that the "trade" has increased substantially. Agents for Chinese companies are now buying up and exporting thousands of tonnes of unwashed bottles, containers, and other household waste.

We know also that much of the green glass, deposited so assiduously in bottle banks and collected so expensively by council collectors, ends up in landfill, simply because there is no market for it in the UK and continental users have their own supplies.

And, as for the treatment electronic waste – soon to be subject to the depredations of the waste electronics and electrical equipment (WEEE) directive, this is nothing short of a scandal. Numerous reports suggest that huge quantities – from the US as well as Europe - are being sent to China, where materials are being reclaimed under the most primitive of conditions, a practices recorded in detail here and here.

The central problem, affecting all these schemes, is that they are based on a flawed economic model. They are regulatory-driven, thus creating huge surpluses of materials which drag the price down and actually make recycling uneconomic except for low-cost societies like China. Thus, as China "corners the market", successive British companies – who are required to maintain high regulatory standards – are driven out of business.

One business that is flourishing, however, is Valpak, a company set up in the UK to administer EU-related recycling schemes, whose chief executive is none other than John Selwyn Gummer. As environment minister in Major’s government, he set up the schemes in the first place. Valpac has opened its own office in China, where it can monitor the flow of waste imported, and credit British firms with having "recycled" the quotas demanded of them by EU law.

Had the Tories elected a proper conservative for their leader, he could have revisited these schemes and come up with an effective, market-driven system which would have ensured that such material as is collected is properly used. Instead, however, the Boy has bought into the EU scheme with his fatuous Vote blue – go green campaign, advised by none other than John Selwyn Gummer.

Europhile Gummer is hardly likely to gainsay his beloved EU systems, especially as he makes such huge financial benefits from them. And such is the grip the Europhiles exert on the Boy that, as Booker reports this morning, he has appointed to advise him on foreign policy a small group of "wise men" including Chris Patten, Douglas Hurd and Malcolm Rifkind.

They make it even less likely that a "green" Conservative policy will kick over the EU traces, leaving us with a chaotic recycling policy that puts binmen in hospital, costs us a fortune and despoils developing countries.

As most people remain ignorant of this, the policy still has enough "feel-good" factors for the like of Cameron to parade but, as you lift the lids of your recycling bins, you should have no difficulty detecting the stench of hypocrisy.