A conspiracy of silence 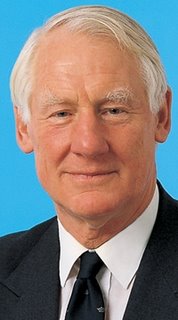 I am allergic to conspiracy theories and tend to prefer "cock-up" as the ruling power behind most adverse events in this universe.

But Booker today in The Sunday Telegraph casts a conspiratorial glow on the strange silence of the politicos on the vexed subject of the European Union.

The illumination comes from none other than Lord Butler of Brockwell, formerly Robin Butler, cabinet secretary under five prime ministers. He recently gave a talk to his old school, Shrewsbury, where he not only entertained his audience with some caustic comments on Tony Blair's handling of the Iraq war but startled them by observing that the biggest issue at the 2005 election should have been "Europe", because it is in Brussels that most of our important legislation now originates.

It was contemptible, Lord Butler said, that the parties had conspired not to discuss this with the electorate, then noting: "Of course to readers of Booker this was not news!"

Neither, of course, is it news to our readers, but it does confirm from a very high source with intimate knowledge of the Blair government that the absence of discussion on European Union issues is very far from accidental.

Given its performance on this issue, one nevertheless expects the government to be reluctant to promote a debate, but it can only succeed in avoiding discussion if the opposition parties do conspire to keep it off the agenda.

This in part explains our loathing of the Boy King, who was highly influential in setting the tone for Howard's general election campaign. His determination to keep the issue out of the headlines – which continues to this day – is a continued testament to his unsuitability to become prime minister.

Worst still, it encourages those moronic commentators who pop up every time European Union affairs are raised, those who seek to marginalise people who are concerned for the future of this nation and who declare that "no one is interested in 'Europe'", demanding that we concentrate on "mainstream" issues.

But the only reason "Europe" is not mainstream is that very conspiracy of silence to which our former senior civil servant referred. We are pleased to have the importance of the issue reaffirmed from so senior a source and will, of course, keep "banging on", despite the silence of those conspirators who would seek to ignore it.