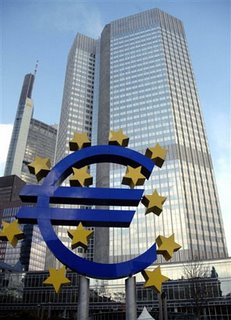 Reports on the economic health of the EU are out today and, depending on which source you prefer, the member state economies are doing well or very badly.

If you prefer Associated Press, what it quaintly describes as the "European Union head office" is forecasting that the economy is "to rebound", expanding by 2.3 percent this year - compared with 1.6 percent last year - boosted by increased investment and sustained world growth.

The only cloud in the sky in this assessment is the volatility of the oil markets, which remains "the biggest near-term risk" because "very low spare capacities" leave the EU vulnerable to supply disruptions.

Furthermore, this must be set against world growth, which is expected to reach 4.6 percent this year and only slightly less, 4.3 percent next year.

Thus it is that Bloomberg reports that "risks to 2007 Euro-region growth" is "tilted to downside", citing the commission as saying that growth in the eurozone will slow next year as oil prices surge and rising interest rates around the world cool global growth.

However, The Business yesterday puts a wholly different and much more negative spin on the data, picking up on the Spanish economy, suggesting that its overheating threatens the entire eurozone.

The "one-size-fits-none" interest rate in the eurozone means that Spain is undergoing an unsustainable consumer boom, which will be followed by a savage bust, against the background of the eurozone once again drastically underperforming against the world's fastest-growing economies.

The whole process may take two or three years to unfold, says The Business, with the Spanish economy will becoming even less competitive against its euro area peers, leading to a loss of business confidence, a rise in unemployment, a sharp downturn in the housing market and a rise in bad debts.

Whatever your take on these data, the one thing that does shine out is that the European Union economies – and especially the eurozone – are sliding backwards compared with the rest of the world. Beyond that, one is reminded of the saying that, if all the world's economists were laid end-to-end, they still wouldn't reach a conclusion.