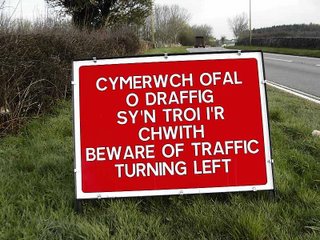 The UK, of course, is by no means the only country to be affected by the wave of immigration from the new accession countries. A significant "beneficiary" of the population movement has been Ireland, which has taken more than its fair share of Latvians, including Russians posing as Latvians, and Poles.

This however, has had unintended and unfortunate consequences, in that it has reversed the downwards trend in road deaths, with the new carnage being wholly attributed to these migrants, a point we noted in our blog.

Given this clearly identifiable problem, and the extremely dubious nature of the driver testing systems in the accession countries, the most obvious – and undoubtedly effective - stratagem would be to require entrants from these countries to take the local driving test, and to prohibit them from driving until they had done so.

The trouble is that Ireland, like the UK, is no longer an independent country and is obliged under the EU dictum on non-discrimination to recognise Latvian, etc., licenses.

Thus we come to the absurd situation of Fine Gael's road safety spokesman, Shane McEntee, proposing that road signs in Latvian, Russian and Polish should be installed on Ireland's twisting country roads, to remind these killer drivers to drive on the left and avoid alcohol.

The absurdity of this suggestion can readily be seen from our illustration of a Welsh road sign. Millions have been spent on multilingual signing and the net result is to add confusion and incomprehension. With the Irish authorities already having created their own quota of confusion, having converted their road signs to metric, one can now see chaos reign.

Absurdity, however, should not be confused with amusement. In the final analysis, this situation is leading to a not insignificant number of unnecessary deaths and injuries, all because governments have been so keen to surrender their powers to our masters in Brussels.