A vote for serfdom? 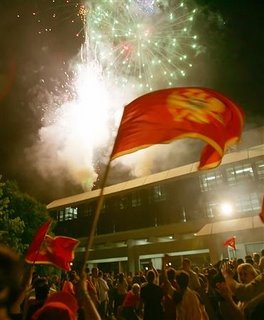 I am probably one of the least qualified to pronounce on the merits or otherwise of the Montenegrins' referendum, but it is interesting to note that the BBC website is running the headline Montenegro chooses independence.

With 55.4 percent of the electorate voting to secede from Serbia, just over the 55 percent hurdle set by the EU, however, one must recall that the primary driver behind the separation movement is not independence per se. What is uppermost in the minds of its advocates is the expectation that the new state, divorced from the delinquent Serbia, will find it easier to join the European Union.

With a population of 620,000 people, this would be barely a mouthful for the EU to absorb, and the influence that those few people could exercise over the European empire would be minuscule. Thus, it would seem, the Montenegrins are not so much voting for independence as serfdom.

For the time being, that status will have a substantial cheque attached to it, and it will take many decades for the Montenegrins to learn the reality of the construct they join – if they are allowed in – but the "colleagues" will no doubt take succour from the fact that yet another nation is rushing, lemming-like into the fold.