Boring us all to death 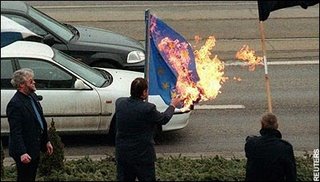 A slightly left-of-field question: what have the EU and the anti-EU party, the UK Independence Party – and, to an extent, other political parties - got in common? The answer, it seems to me, is that for each, their favourite occupation is talking about themselves – to the exclusion of practically everything else.

Certainly, this has to be true of the European Union which, we are told, is planning yet another interminable round of navel-gazing for this weekend.

Foreign ministers of the member states are to gather in Klosterneuburg outside Vienna on Saturday, "to brainstorm ways to end the political stalemate over plans for an EU- wide constitution", even though almost all member state leaders say they have already come to the conclusion that it is on ice for the foreseeable future, and with it any prospect of closer European integration.

That hasn't stopped Luxembourg premier Jean-Claude Juncker wailing on German radio that "Europe has lost its bearings”, reiterating that "there is no consensus" on what to do about the constitution.

Needless to say, the meeting is not due to produce any decisions, but one "idea" – which is very far from new - is a proposal to open to the public Council of Minister discussions on new legislation. Another is to bolster cross-border cooperation in fighting crime "by removing national vetoes over EU initiatives", something that should be a real "wow" in Eurosceptic Britain.

Given the drearily repetitive refrains, one is almost nostalgic for the days of "up yours" Delors, wishing for a little spark and controversy. Now, the wonder is whether the "colleagues" are trying to bore us all to death, or whether they are in danger of suffering that fate themselves. Perhaps, though, this is all part of a secret plot, hoping we will all switch off, whence they can get on with building their new superstate.

As for the relevance of the photo – there isn't any. Just a nice pic, nicked from David Rennie's blog.

Email ThisBlogThis!Share to TwitterShare to FacebookShare to Pinterest
Labels: Delors