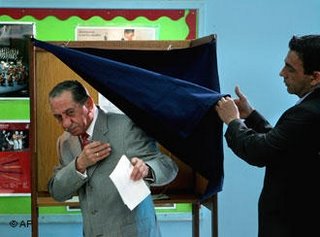 The European Union might be about promoting fraternal feelings between member states – or so it keeps telling us - but something is going badly amiss with the "project" in Cyprus.

The entry of the island into the EU two years ago was supposed to bring forth a classic demonstration of “soft power”, reconciling the warring Greeks and Turks who have been divided since the Turkish invasion in 1974. But, at the time – even with the intervention of the UN (or perhaps because of it) -reunification did not occur and only the southern half of the island is within the EU.

Now, two years later reunification seems further away than ever after elections in the Greek south. Voters have brought back the ruling coalition with an increased majority, endorsing leaders who oppose reunification attempts.

Half a million Greek Cypriots were voting for 56 representatives – their first chance to pick MPs since a referendum on reunification was rejected in 2004 – and, according Deutsche Welle, president Tassos Papadopoulos' DIKO party won 18 percent of the vote - up 3 percent on its last showing. His allies from the communist AKEL party won 31 percent and the pro-reunification opposition party, the DISY, lost ground to come a close second with 30 percent of the vote. The European party, a new right wing group, won a mere 5.7 percent of the vote.

The result dashes hopes that the Greek Cypriot government would show flexibility on the Turkish Cypriot community’s demand to be allowed to trade directly with the EU, and is regarded as the latest setback to attempts to re-unify the island.

Some commentators believe it could even undermine Turkish efforts to join the EU. The pinch point here is Turkey refusing to allow Cypriot ships and aircraft access to its ports and airports as long as the island remains divided. So bitter has this dispute become that Papadopoulos has given Ankara an ultimatum that, if they are not given access by the end of the year, Cyprus will veto Turkey's bid to join the EU.

So much for the peacemaker extraordinaire – two years on and things are worse than when the EU first got involved.