Guns but no butter 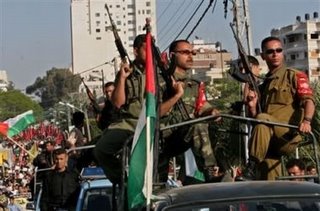 Great excitement in the European Parliament on Tuesday when Mahmoud Abbas, otherwise known as Abu Mazen addressed that august assembly, they having nothing much to do at the time, and explained that there was one Palestinian politician around who was ready to negotiate with Israel.

That politician was himself and it is true that he did signal before the last set of elections that the notion of acknowledging Israel’s right to exist and the creation of two states in Palestine were things he could live with. Unfortunately, this did not extend to anything like a control of the various terrorists. Instead, he spent almost all the money the Palestinian Authority received from the World Bank and other organizations on employing more and more people to work for the authority and to join various militias, not forgetting money for the families of members of the Al-Aqsa Martyrs’ Brigade who had suicided, successfully or unsuccessfully, themselves.

Still, Mr Abbas is viewed as a moderate in Palestinian politics and was greeted rapturously in the Toy Parliament, whose members seem to be uncharacteristically modest and silent on the subject of the effective civil war that is going on in Gaza. Usually, those overpaid bozos in Brussels/Strasbourg pass resolutions and demands at the drop of a hat.

The Parliament President Josep Borrell flattered the man mercilessly and, inevitably, touched on the subject of the impoverished Palestinian Authority that is creating a humanitarian crisis in Gaza and the West Bank:

“The EP President said Europe fully respected the results of January's legislative elections, even though these had caused serious concerns in the international community. "That community is starting to realise the dangers of cutting off aid. The Quartet meeting this week gave the EU responsibility for finding a mechanism for aid to the territories at least to keep public services running." He noted that the Euro-Mediterranean Parliamentary Assembly had warned of the chaos that could result if aid was cut off. The EU, he said, was the only body capable of talking to all parties at the same time. He told Mr Abbas: "You are the umbilical cord linking to the path of peace."”

I guess President Borrell is too busy to read the reports his researchers must have given him (mustn’t they?) about what is going on in Gaza, where Hamas, the leaders of that impoverished Palestinian Authority, have just put on the streets yet another 3,000 strong militia, complete with first-class guns and ammunition.

“The Palestinian Authority is asking a federal judge to reconsider an order to pay nearly $200,000 to the estate of a couple killed in Israel in a terrorist attack, saying the PLO Mission here will have to close if the money is turned over.”

The heading of the piece “Don’t Whine For Me, Abu Mazen” implies a certain amount of scepticism about pleas of poverty.

There is a link to another blog that sums up the story of the new militia, the existing militias and the “shocking and astonishing” revelation that the late unlamented Chairman Arafat had spent large amounts of aid money on arming terrorist groups. Whatever his wife did not secrete in Paris, one assumes. Well, of course, none of us knew this. Goodness me, no.

Nothing much changes, it seems. As the Hedgehog Blog puts it: “Millions for Kalashnikovs Not a Penny for Economic Development”. And not just Kalashnikovs but many other kinds of guns, ammunition, rockets and explosives. Somehow, despite the humanitarian crisis being created by the wicked West not giving bucketfuls of money directly to the Palestinian Authority, there is never any shortage of it for the arming of the various militias.