Negotiating with the Bear 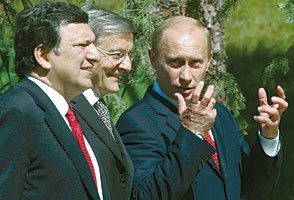 It is hard to read the runes of the EU-Russia Summit that has just taken place in the pleasant holiday resort of Sochi. (I imagine it was not all that pleasant while the summit was happening but, luckily, it was not a long one.)

Let’s get out of the way the agreements first. The main purpose of the meeting was ostensibly the need to ease up the mutual visa regime, in turn to move, possibly towards a visa-free agreement. There has been some movement on that but as the BBC Russian Service points out on its website (not the English language article on the BBC World site), the new agreement will affect diplomats, personalities in the culture world and students. The rest of us will continue to have problems and pay over excruciatingly high sums (that is, assuming, we can get a visa at all).

Another agreement concerns illegal migrants. Russia has finally agreed to take back from EU member states illegal immigrants who had made their way from that country. Of course, as all matters pertaining cross-Continent and, indeed, any other migration, the practicalities of the problem have not been resolved.

There were also discussions about Iran, the Middle East and human rights, according to the English version on the BBC, though the article gave no details as to whose human rights. Not, one suspects, that of the Russians’ or other nationalities within that country.

“An agreement was also reached on co-funding of a European Studies Institute in Moscow, and an EU aid programme for the North Caucasus.”

There are already various institutes in Moscow that specialize in European Studies. Indeed, I recently took part in a discussion on the BBC Russian Service Moscow with a young man who was billed as an expert on European integration. He appeared to know a good deal more than many of our own so-called experts. So, the Russians do not lack institutes or experts but they might like a bit of EU money to subsidize them.

As for any aid programme for the North Caucasus, we must beg leave to doubt its efficacy. In the first place, the Russian authorities do not let foreigners into the North Caucasus most of the time. Therefore monitoring will be impossible.

In the second place, a recent Court of Auditors report looked at what happened to the money paid over by the EU to Russia under the TACIS programme. Alas, little if any of it reached the people it was supposed to help.

This brings us to the most important issue – energy security and dealing with Russia that is sitting on a very large amount of oil and gas, being quite prepared to use that fact in political battles with anyone President Putin perceives to be the enemy inside or outside the country.
It is on this subject that reading the runes becomes a little difficult.

Economic liberalization in Russia has receded with oil, gas, metallurgical firms and many other industrial firms gradually being taken back into state control, though in a somewhat round-about fashion. Not for Putin out and out nationalization. The process is done through enforced sale of shares, appointment of cronies to management positions and a creation of a new class of “oligarchs”, who are dependent on the state and on Putin’s personal favour to stay in the place they have been put or to advance.

This is of particular importance in oil and gas production, since the Russian economy lives off that to a great extent. At present the prices are high and Russia is doing its best to kept them there. Whether as a result of the renationalization or for some other reason, productivity in both spheres have fallen.

In the short term that is useful for Russia – lower productivity means higher prices. In the long term that is less clear, as the eminent economist and political writer Yegor Gaidar pointed out recently in the newspaper Vedomosti. [The article is in Russian but some of our readers might be able to make use of the link.]

Mr Gaidar’s points are straightforward: Russia has been using her wealth of natural resources to conduct an unnecessarily hard bullying policy towards her neighbours. He also hints that the wealth and the abnormally high prices have contributed to the gradual undermining of democratic freedoms and processes in the country itself.

Above all, he warns, this is not a solid foundation for an economy as the Soviet example of the 1980s proved. Prices fell and there was nothing the Soviet leaders could do. Of course, he adds, Russia now could diversify her economy with greater ease than the old Soviet Union did. It has to be admitted, however, that there is little sign of it happening, unless one considers the sale of arms diversification.

The EU was intent on making President Putin see the light in various ways. In the first place, they were hoping for some assurance that the episode of gas being cut off to the Ukraine (and, hence, Western Europe) early this year, will not repeat itself.

They got cold comfort from the Russian president, who said according to the BBC Russian Service:

“When Russia fights for her interests, she looks, just like other countries do, for acceptable ways of solving her problems. It is curious that anyone should have difficulties understanding that. We all know what sort of means and methods the United States uses when protecting its interests.”

There is no getting away from the fact that Putin is a Soviet apparatchik through and through. His language shows that beyond any doubt.

The truth is that Russia uses economic power to pressurize countries that are not, in any real way, a threat to her: Ukraine, Moldova, Georgia. As Putin’s former adviser, Andrei Illarionov put it in an article a couple of days ago:

“These countries have become the enemies in the new "chilly war" being waged by Russia's authorities. At the same time, new friends have emerged in the shape of the leaders of Belarus, Uzbekistan, Iran, Algeria, Venezuela, Burma and Hamas. A quite different G8.”

There is little the EU can do about it and the promise of a possible free trade agreement, dangled before President Putin by Commissioner Benita Ferrero Waldner is unlikely to work. Despite the rosy view taken by the BBC English language website, it is clear that Putin has stonewalled every proposal. The EU delegation (Barroso, Schüssel, Ferraro-Waldner and Solana) seemed pathetically grateful for his assurances that he was not intending to divert oil and gas to China. As there is no pipeline at the moment, they can rely on that promise for now.

At the time of the Ukrainian crisis in the first days of January, there was some talk in Germany of the need to diversify its sources of energy, not to be at Russia’s mercy. Those talks have died down. As all German governments seem to be completely beholden to the Greens, there can be no question of nuclear power. The country remains a major producer of coal but that seems to be insufficient for its needs. And renewables are unlikely to fill the gap.

Far from looking for alternatives, a move that might concentrate President Putin’s mind and one that he would appreciate as one of genuine realpolitik, Germany is a partner in the new Baltic pipeline that will bypass Poland and the Baltic states. (Former Chancellor Schröder, as we know, has taken an important part in the creation and, now, the running of that concern.)

This subject, too, came up during the Summit and, graciously, Putin agreed to a bigger role for the Baltic countries. But, he added, any share they will have, must come out of the German one.

Then there is the question of western investors in the Russian energy market. To that, President Putin gave a categorical negative, though he pointed out that, in order, for the West to be allowed into the “holy of holies” of the Russian economy, the European countries must give something in return.

One assumes that the references were to the possible flotation of Rosneft in London and the mooted acquisition of Centrica by Gazprom. Mr Illarionov had harsh words on both subjects:

“The former economic adviser to Russian president Vladimir Putin has warned that the planned flotation of state-owned oil giant Rosneft would see "the London Stock Exchange being used to distribute stolen assets". …

"This is a crime which will be investigated by a new government and reversed," he said in the latest salvo against the controversial initial public offering. His comments follow denunciations of the sale by investors including George Soros and Foreign & Colonial, which recently raised a warning flag over Russia's corporate governance practices.

Rosneft's assets include Siberian oil explorer Yuganskneftegaz, responsible for 11pc of Russia's oil output and forcibly "acquired" by the Kremlin in December 2004 after the arrest of Mikhail Khodorkovsky, the oligarch jailed last year for tax evasion. "We are dealing with a company with a very questionable history. We just don't know what happened," Mr Illarionov added.”

Nor was he too impressed with the notion of Centrica becoming part of President Putin’s armoury of weapons:

“Speaking in London, he also questioned why Prime Minister Tony Blair had apparently left the door open to a mooted takeover of British Gas-owner Centrica by Gazprom, the Kremlin-controlled gas producer.

"I'm puzzled. Many people have expressed concerns, but this is a very clear statement that it is ok for Centrica to be bought by a state-owned company. I do not hear anything similar from anyone else in Europe.”

It is not so much that Gazprom is state-owned but that the state is a hostile one, as seen through its own pronouncements, and always ready to use economic methods to achieve political submission.

Mr Illarionov has made it clear that he thought the G7 should boycott the G8, whose next summit will be in St Petersburg. Allowing for the fact that the G8 is a largely pointless organization and for the fact that Russia should never have become a member, a boycott at this stage seems unlikely and, probably, injudicious.

Nezavisimaya Gazeta (Independent Newspaper), one of the few Russian media outlets that is not either completely controlled by the state or has submitted to its instructions, points out in its detailed report of the Summit [again in Russian] that this was clearly a precursor of the July G8 meeting. The basic and, apparently, unbridgeable disagreements between the two sides are indicative of what is likely to happen.

NG also adds an interesting detail. Sochi is hoping to host the Winter Olympics of 2014. Thus, the EU-Russia Summit was intended to strengthen the city’s international image as well as Russia’s. To this end, the whole resort was washed and flower borders were planted along the roads. These, the local population has christened kolodyazhki after Viktor Kolodyazhniy, the Mayor of Sochi.