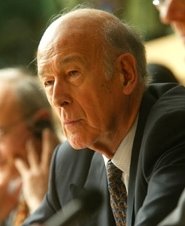 Thank heaven for Valéry Giscard d'Estaing. If we ever needed reminding that the political élites of Europe are represented by an arrogant, detached, totally self-absorbed technocrat, here he is for all to see, popping up in The Financial Times to give us the benefit of his wisdom.

And, oblivious to the fact that, even now – nearly a year after their rejection of the EU constitution - Giscard says the French should be given "a second chance" to vote on the treaty.

There is a sting in the tail though, because the man's idea of a "second chance" is either a second referendum or a parliamentary vote - after next year's presidential elections. No prizes for guessing which one he would actually prefer. "If we had chosen to have a parliamentary vote last year the constitution would have been easily adopted. It is the method that has provoked the rejection."

Then, ignoring the very fundamentals of treaty law, he argues that because 16 out of 25 countries that have ratified the constitution – the latest being Finland – there is a "qualified majority". Effectively, he is saying – or certainly implying – that a group of countries can vote to take power from other countries. All he is concerned about is the "modalities" of adopting the constitution.

Nor does he think that the idea that resubmitting the same question to the French people is "anti-democratic". "People have the right to change their opinion. The people might consider they made a mistake," he declares.