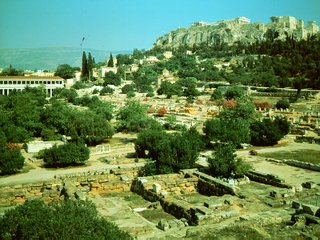 They do love their pretensions, don’t they. Agoras! I ask you. An agora was a marketplace in the Greek cities just like the forum was in Rome and the various other cities of the empire.

A marketplace is where you discuss things and where individuals can make decisions that might or might not affect bigger issues. That is why it is possibly the most democratic institution in the world but it is not really conducive to legislation in the modern world. Ah but it is not legislation we are talking about but another way of bringing the citizens closer to the European project.

The EUObserver reports that some MEPs would like to revive what they fondly imagine was the agora (I think they mean only the Athenian one, which was the hub of that city’s political and judicial life for many centuries – as long as you were a free, male Athenian).

“The idea of "agoras" has been filed by the parliament's vice-president, French Green MEP Gerard Onesta whose original ambition was to present the project to the public exactly one year after his co-citizens rejected the new EU constitution, on 29 May.

"Through the no vote in the Netherlands and France - I hope - the citizens did not say no to Europe but they said stop! Now we want to participate. Please help us to participate," Mr Onesta told EUobserver.

Under his proposal, the parliament would organise five to six forums per year with around 300 participants to discuss issues chosen by the parliament's political group leaders.”

Well, one can argue what it is the citizens of France and the Netherlands said “no” to and my guess would be that a good deal of it had to do with the sort of managerial, unaccountable governance that M Onesta is part of but one cannot quite expect him to see it.

The big question is why does he think that the rather negative attitude as expressed in the “no” votes should change because the European Parliament gets together groups of carefully picked citizens of various EU member states or, perchance, representatives of various businesses and lobbying organizations and allows them to discuss some carefully selected topic.

M Onesta’s response to all the carping criticism that greeted his proposal was to point to the fact that if it is introduced, at least some of the lobbying will be done openly in a transparent fashion.

Apart from admitting that at the moment there is a great deal of untransparent lobbying going on behind the scenes, M Onesta seems not to have understood the basic problems. (And neither have some of his critics like the usually astute Jens-Peter Bonde, who said initiatives like this should be from the bottom up.)

In the first place, there are already assemblies in all the member states that are accountable (more or less) to the people through elections and who ought to be legislating but whose role has been reduced to powerless scrutineering.

Growing out of that is the second point that also seems to elude the various members of the Toy Parliament. No amount of organized jaw-jawing (and whom precisely will 300 people six times a year represent?) makes up for the fact that the EU legislative process will not change.

It is not Europe that the “no” votes were cast against. One cannot actually vote against a continent or a very general cultural concept. They were, one way or another, cast against the European project and adding a few little tucks and frills to it is not going to alter the fact that the dress does not fit and is, in any case, unappealing.