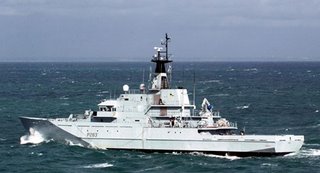 Justin Stares has come up with a good story in The Sunday Telegraph this morning, claiming that Brussels is drawing up a plan for an "EU navy".

This is the EU commission planning to set up a European coastguard, giving rise to fears of a back-door attempt to create an EU navy with its own powers to stop and search shipping.

According to Stares, the plan involves upgrading the European Maritime Safety Agency (EMSA) into a fully-fledged coastguard, and is "buried" in a document revising European Union (EU) transport policy that is due to be published next month.

Apparently, the commission is says that a European coastguard would help to enforce maritime legislation. It would have the authority to intercept shipping across all of Europe's traditional maritime borders, which could require that crews be armed - and raises questions of national sovereignty over coastal waters.

The issue was raised last week in Lloyd's List (for which Stares works), which accused the commission of attempting to build up a navy by stealth in a leading article. "The concept of a European coastguard has a federalist charm about it that causes eyes to brighten instantly among gatherings of Europhiles, tired of endless discussions about fish or agriculture," Lloyds List said. "In a way, it is a European navy, by the back door."

Oddly enough, we raised precisely this spectre way back in October 2004 when we retailed the comments of an official from commission’s enterprise DG, Ronal Vopel, declaring:

We've established the EU's right to define territorial waters for the purposes of ship pollution control, ship safety and fisheries policy. The next step is littoral security and that points to coastguard and naval issues.

Even then we were remarking that the eventual destination might be the creation of a EuroNavy, and we followed this up with a story December 2004, reporting that the fledgling European Maritime Safety Agency (EMSA) was to charter its own emergency oil spill vessels, covering most of Europe's sensitive coastline.

But, while the commission has been beavering away in the background, the most strident calls for an EU coastguard have in fact been coming from the member states themselves, as in last March, when EU justice commissioner Franco Frattini was calling for an EU coastguard service in the Mediterranean, "to fight human trafficking and rising numbers of illegal migrants".

Although Frattini is a member of the commission, he was speaking very much as an Italian politician, his agenda being to obtain EU financing to help towards the cost of policing Italian waters in order to control illegal immigration. And that agenda goes way way, with a report in January 2003 of the launch of an “EU fleet” to patrol the southern shores of Europe and head off the pirate flotillas that ship illegal immigrants from North Africa.

The scheme, called Operation Ulysses, involved five European nations, including Britain, which contributed a Customs cutter, Seeke, and was viewed as the first step towards a common EU border guard. The "fleet" was made up of vessels belonging to Spain's Guardia Civil, with Italy, France and Portugal also sending vessels.

One could now say that the issue is coming back onto the agenda, except that it has never been taken off it – just that no one has been taking any notice. Sure enough, though, it will disappear from the media after the brief attention from The Telegraph, representing yet another classic example of the slow, incremental progression of European integration.

In the fullness of time, we will be seeing armed patrol vessels sporting EU flags and the proto-EuroNavy will be there – by which time it will be too late to protest. In the meantime, of course, any suggestion that the EU is planning to create its own navy will be strenuously denied.