One of our excuses is missing 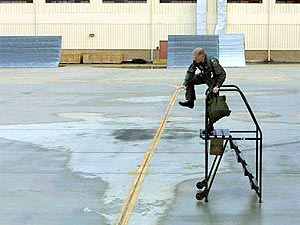 As correctly forecast by this blog, it seems like the second engine for the new "stealth" Joint Strike Fighter (not pictured, left) is to go ahead, thus removing what we thought could be an excuse for the British government to cancel its order for the aircraft.

The deal in not quite in the bag yet but, according to the Financial Times, two congressional committees have recommended restoring money in the 2007 defence budget for an alternative engine.

Discussed here, this was very much expected. Although the Pentagon earlier this year recommended cancelling the engine, which was being developed by General Electric and Rolls Royce, the final decision on the defence budget - and thus any cancellation - is made by Congress.

However, the situation looks hopeful, but perhaps not to the MoD. Conspiratorial or not, we felt that the lobbying by Blair personally, and leakage of Bush's rebuff, could have been set up to give him to excuse to cancel the JSF, clearing the way for the UK government to buy the French Rafale.

As it stands, a decision by the British government on whether to participate in the production phase of the JSF is still expected in November, whence we will know where we stand on a "litmus test" project that will either reinforce the Anglo-American "special relationship", or spell its demise.