Not big enough for both of them 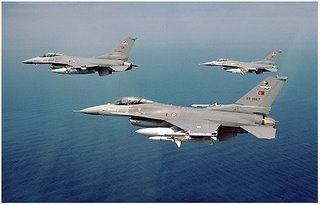 An odd feature of this blog – not always easy to explain – is how we can leave a subject for a while and then return to it, only to find that it then crops up again immediately afterwards.

Thus is it with the Turkish-Greek situation, which we touched on briefly yesterday, in the context of the Cyprus elections, having not dealt with it for some time. Then, not 24-hours later, we find ourselves returning to the subject, with news yesterday of a mid-air collision between Greek and Turkish fighter aircraft in disputed airspace over the Aegean Sea.

The Guardian, amongst others, does not hesitate to draw serious inferences from the event, talking of a "crisis" and the re-ignition of age old rivalries.

The crisis seems especially serious as the two aircraft are believed to have rammed each other, in full view of a passing commercial passenger aircraft. The Turkish pilot, Halil Ozdemir, was rescued by a merchant ship after ejecting, but last night emergency services were still searching for the downed pilot of the Greek F-16 jet.

The Greeks are claiming that the aircraft collided at 30,000ft after the Turkish fighter had "violated air traffic rules", causing the collision by a "sudden manoeuvre". On the other hand, the Turkish military claim that the crash had been caused by a Greek fighter interfering in Turkish manoeuvres in international airspace.

However, although this incident has just now hit the news, we drew attention to the continued jousting between Greek and Turkish aircraft in October 2004 and, of course, it had been going on long before that.

That much is confirmed by the mayor of Karpathos, the island closest to the collision, who told the Guardian, "We see them up there fighting it out every day … At some point something like this was bound to happen."

Up to press, Greece, supposedly, has been a leading champion of Turkey's bid to join. But this incident, added to the tensions in Cyprus following the weekend elections, makes it very hard now to see how the Greeks can be reconciled to Turkish accession to the EU. It is not only aircraft that collided yesterday, but two political systems. The thinking now is that the European Union is not big enough for both of them.

If that proves to be the case, the political ramications for the European Union are huge.