The engineer of human souls 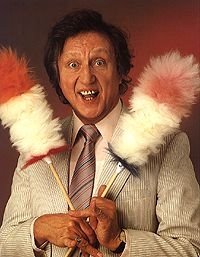 Reluctantly I once again turn my attention to the Boy-King of the Conservative Party, who, according to Peter Oborne in the Evening Standard, is the coolest leader that party has ever had. Mr Oborne, to be fair, admits that it makes him and Conservatives like him feel queasy but he sees some merit in Our Dave and his lovely wife attending a party given by the Beckhams. My own feeling is that attending parties given by the Beckhams is vieux jeu. Just about every airhead has done that.

In order to show that he is not a complete airhead but has serious ideas (cue: drawing together eyebrows, narrowing eyes and looking soulfully into the middle distance) the Boy-King has been pronouncing on happiness.

It is tempting to draw a parallel with Ken Dodd, who sang a song called “Happiness” and had a “Happiness Show” but I feel that is an insult to a talented and hard working entertainer who was extremely popular and gave pleasure to a large number of people.

In a way, that is the point the Boy-King seems incapable of grasping: that happiness, contentment and many other things that make life worth living are not to be provided by politicians or the state, assuming he is ever in charge of that vehicle.

His latest pronouncement (approved by the Guardian as something that wrong-foots Gordon Brown) tells us that “there is more to life than money”. Sheesh. There is something I would never have thought of myself. I mean I really need a wealthy politico who has never had to work for a single thing in his life to tell me that life consists of more than just a bank balance. (Mind you, for people who have had to struggle to achieve a bank balance, it may well be the epitome of happiness.)

What these comments do is expound the Boy-King’s own Third Way (Gorbachev, Blair and now Cameron – will they never learn?).

“The traditional response of the right – that government can't do much about all this and shouldn't try – is inadequate. But equally, the response of the new left – that government should regulate the specific details of working life – is too ineffective. It produces unintended consequences that end up damaging our competitiveness. It's vital to create a space... which stands firmly between regulation and indifference. I refuse to choose between the intolerant impulse to right every supposed wrong by passing new laws, and the coldly amoral refusal to even take a view on the actions of others.”

Of course, enabling people to make the best of their abilities is not precisely coldly amoral but shows a belief in freedom, individual rights and responsibilities as well as faith in people.

Furthermore, the number of people on the right who believe there should be no rules at all and any employer be allowed to do whatever they like on the basis that the market will take care of it all, is strictly limited. So to say that those of us who believe in freedom of enterprise, absolutely minimal government and the importance of private life are refusing “to even take a view on the actions of others” is stupid, ignorant and insulting, not to mention ungrammatical.

What is it the Boy-King really means? Since he manages to throw in the compulsory reference to “competitiveness” whatever he might think that is, one assumes that he means such matters as minimum wage and benefits. What are they if not money? What on earth makes the man think that money handed out in the form of benefits will somehow contribute to the sum total of human happiness? Surely, if anything, it is money earned that is much more likely to do so.

In any case, what of those benefits, minimum wage, state run health service, the lot? What if it becomes so expensive that jobs will have to go to other places and unemployment will rise? (In fact, it is doing so already.) The state sector cannot leach off the private one for ever. Will that make people happy?

But who am I to argue with such noble impulses? If the Boy-King really does want to be the engineer of human souls, as Joseph Stalin called Soviet writers according to Commissar Andrei Zhdanov at the 1934 Writers’ Congress; if he really thinks that there is some kind of a utopia in which happiness can be provided by political actions; this blog is ready to suggest some ideas.

Many of us would be reasonably pleased if this country once again became an independent state and a constitutional democracy. That would mean taking it out of the EU and negotiating completely new agreements with other European countries. It might also mean a new Bill of Rights and possibly another constitutional document that enshrined what we consider to be the ancient liberties of this land.

In order to protect this country, its liberties and individual rights we need security – defence for the country and a workable police and judicial force for the individual. It would make us very happy if the Conservatives turned their minds to these matters.

Many people were made happy by the fact that they acquired their own property and could aspire to a better life, to give an even better and more spacious life to their children and could achieve all that on the basis of their own efforts not because goodies were handed out.

Much unhappiness is caused by our educational system, which does not train our children to get jobs and does not provide them with personal development and knowledge, the very tools that create personal happiness. We would all be immeasurably happier if the Conservative Party, led as it is by people whose families were immensely fortunate in being able to afford good education, would introduce changes into the system that allowed parents to choose the best for their children and for schools to provide the best education. No, dear Dave, it cannot be done by well-meaning toffs or gentlemen and ladies in Whitehall or the Town Hall. That has been tried and has been found wanting. Our children are neither able to compete nor are they happy.

In fact, one could sum it all up by the following comments: in so far as happiness can come out of politics, we would all be much happier if we had an effective opposition and if we had at least one party that did not mouth outdated semi-socialist shibboleths.

Since, however, happiness is not provided by politics (the arrogance of the man!) we should all be a lot happier, more fulfilled and more contented if the government, the politicians and all the officials simply butted out of our lives. Not much to ask for, is it? Think how much that will do for the sum total of human happiness.