A reason to support the EU? 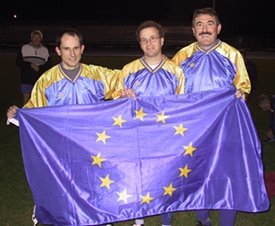 Oddly enough it was just this morning that I pointed out that, despite not being quite as old as Methuselah, I can remember a time when football was something only sports writers commented on. If you followed a team you knew all about it; if there was a particularly interesting event going on, the rest of the country knew about it; otherwise we were mercifully free of endless articles, pictures, discussions of footballers, managers, their girlfriends, their salaries, their clothes and whatever else may be considered essential by our media. In parenthesis, let me note that no other country has the same attitude – mostly football stays on the sports pages.

It seems that we have the solution to this problem. According to an article in the Sunday Telegraph the EU is producing a plan to control various aspect of football.

“The scheme, to be unveiled this week, will propose an EU-wide "good governance" structure to overrule national football associations on almost every issue. It will include "strict rules" on the ownership of clubs and even a salary cap for high-earning players.”

As we know from bitter experience, anything that comes under EU governance tends to get ignored by the MSM. Once the EU runs the wretched thing, we shall not hear about Wayne Rooney’s toes, Beckham’s tattoos or feet, anybody else’s night out with the lads. We shall be spared stories that can all be entitled: “Young footballer has girlfriend”. The next manager of whichever football club happens to have lost the last one will no longer be front-page news. Well, one can dream.

As a matter of fact, I quite like the game. I don’t think it is the “beautiful game”, a phrase that is so stupid as to require no particular discussion. But it is a good game and, as a child, I played it. As a child and as an adult I have watched it.

The political aspect of sport is also something I am very conscious of. There is no need to drag out the Berlin Games again to remind people of the political implications of major sporting events and of sporting teams. One only needs to think back to the great Hungarian football team of the early fifties and the attempt to make it into a symbol of the new socialist Hungary; or to that famous final in the 1954 World Cup, which profoundly both the losers (Hungary) and the winners (West Germany). (Not to mention the various Olympic Games and World Cups that have taken place in the last few decades.)

In other words, this is our old friend the Adonnino plan to create a European identity at the expense of national ones. First we shall control the structures of the football teams and the associations, then we shall think of an EU team, though how they can ensure that all the member states field at least one player remains a mystery. Theoretically, that will ensure a greate feeling for the European project. In practice, people will go on supporting their local teams.

I have a feeling that Blair, being more of a “man of the people” than, apparently, the sports minister who waxes lyrical about “European football”, may declare this one off side. Alas, we shall continue to read about the wretched footballers in every section of the newspaper.