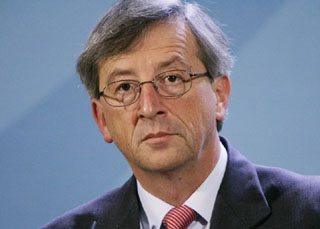 It says something for the wonders of the internet that the words of a Luxembourg politician should be recorded by a German newspaper and posted on its website, for them to be picked up by a small political group masquerading as a news agency, based in the EU parliament in Brussels, to be retransmitted by a Chinese news agency, then to be trawled over by a blogger in Yorkshire, England, and posted back on the net via a server in California.

The politician in question, as you might have guessed, is Jean-Claude Junker, prime minister of the principality of Luxembourg, his comments recorded on Xinhuanet in terms that he does not think that a deal on the EU constitution is possible before 2009 – and even that date is optimistic.

This originally emerged from an interview with German newspaper Sueddeutsch Zeitung, with Juncker counselling that, instead of rushing to revive the constitution, the EU should instead extend its "period of reflection on the constitution," scheduled to end in June.

Such caution comes from a man who was at the helm during the traumatic period (for the "colleagues") last year when first the French and then the Dutch rejected the constitution. At the time, he seemed to have had the greatest of difficulty in understanding the meaning of the word "no", so his conversion to the cause of realism is all the more welcome.

Unlike the commission, which is relying on its recent "special Eurobarometer" to perpetuate the myth that "citizens" want "more Europe", Juncker seems to believe there is a serious crisis for the very opposite of reasons, that "there is no longer a majority of Europeans who want more (EU)."

Like others in his class, though, Juncker believes that the intervening time should be spent extolling the virtues of "Europe", picking on the same areas outlined by the commission - international organized crime and terrorism – as well as underlining the importance of the single currency, all to demonstrate the utility of the construct.

What he perhaps does not fully appreciate – or is studiously avoiding – is the determination of national politicians (and the media) to avoid discussing "Europe". This is not only a British phenomoneon but one which will increasingly prevail in France and the Netherlands, as national election campaigns dominate the political environment.

Meanwhile, we are left with a paradox. The top level "political Europe" might be atrophying, but the classic Monnet-style economic and administrative integration continues apace, aided and abetted by the EU Court of Justice – as we saw recently with the Watts judgement.

Nevertheless, this too is having its reverses, not least with the failure to promote greater integration of the energy market and the problems with gaining acceptance of the services directive.

Juncker, therefore, is fishing in muddy waters. It is not surprising that he is forecasting delays in the timetable of integration, but neither he nor anyone else is yet able to see whether the operators might eventually be forced to recognise a greater reality and post a "cancelled" notice on the destination board.