A matter of nearly complete ignorance 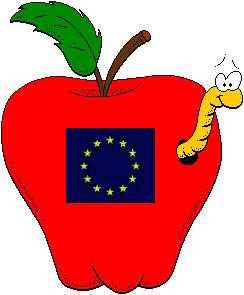 The EU commission yesterday released a special Eurobarometer on the "Future of Europe", subtitled, "EU listens to citizens".

There are, in fact, two reports, one a detailed opinion poll and the other outlining the results of qualitative research (focus groups).

Predictably, the commission emphasises the favourable (to it) elements of the research, pointing out that "comparable living standards, followed by the introduction of the Euro in all Member States, and a common Constitution are elements which are of most importance for the future of Europe." It thus claims that, "expectations for more Europe remain solid, in relation to key issues: fight against unemployment, protection of social rights and economic growth."

The fragrant Margot seizes on these findings, to declare:

Citizens want Europe strong. There is a feeling of solidarity and a need for common solutions. The EU is associated with security: from social security, security against terrorism and crime, security in health, living and environmental conditions to job security. The EU is expected to harness globalisation, bring solutions in terms of peace, democracy, living standards as well as research, innovation and economic performance. This should be the foundation of the EU policy agenda, which will help reinvent and renew the EU ahead of its 50th anniversary.

However, not all is what it seems (is it ever?). Although the copious detail tells the commissioners and Margot Wallström what they want to hear about "citizens" views of the European Union, there is a bloated worm at the core of their apple.

There is, says Eurobarometer, "near-zero knowledge and understanding of the functioning of the Union, its institutions and their role." The only institution (more or less) clearly identified is the European Parliament: not that much is known about it in actual fact, but its name suggests an identity and a role comparable to those of a national parliamentary assembly. It goes on:

The Commission is sometimes (not always) known by name, but what it is and does remains nebulous – both as regards how Commissioners are nominated, its institutional role, its relations with the other institutions and how it works. Mentions are even made of "commissions" (in the plural) without any notion of what they may stand for.

As if that is not enough, it adds: "The Council is practically completely unknown as an institution. The institutional workings of the Union and how decisions are taken is a matter of nearly complete ignorance."

Our own experience over many years demonstrates that where ordinary people are fully informed of the nature of the EU and how it works – particularly the decision-making processes – invariably, they become hostile to it. By that measure, it can be said that any enthusiasm shown for the "project" is a function of the "complete ignorance" about it.

Expressions of enthusiasm, therefore, must therefore be tempered by these findings – to the extent that they are, effectively invalid. Certainly, no one can infer that they give any mandate for action, as we are not dealing with informed consent. The "citizens" may want "Europe strong", but only because they know nothing about it.