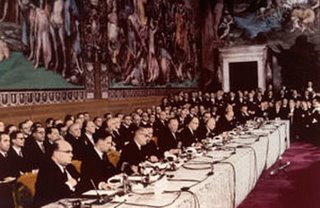 It was only on Sunday that we reported, through the good offices of the Booker column that there had been – and continues to be – a "conspiracy of silence" amongst UK politicos on the vexed subject of the European Union.

Little did we think that, only a few days later, on the Wednesday, when the commission effectively sought to re-launch the European project, that we would see such an egregious confirmation. For, while the press conference and the publication (slightly delayed) of two key commission documents on the "Future of Europe" were major events in Brussels terms, hardly a comment reached these shores via the media. As to a domestic political response, there was none. Even UKIP, which might be thought to have a passing interest in these matters, failed to offer a party line.

To an extent, this is hardly surprising. The domestic political agenda is crowded out by the ongoing soap-opera of the Blair/Brown show, which has been given added impetus by the reshuffle, the fall-out from last week's local election results and the continuing chaos of the dying days of the Blair administration. Thus, apart from a piece on the The World Tonight, the BBC's radio news slot at ten each night, on the Wednesday evening, there was little to inform the British of the momentous events.

I am, however, haunted by the brief excerpt from an interview with Barroso on the programme, who prefaced his remarks on the future of the project with the words, addressed to the leaders of the member states: "If you want it to keep it alive…". That brief phrase at once illuminated the realisation in Brussels that the project is on the rocks, and hinted at the desperation of the president who, by all accounts, is bereft of ideas on how to salvage anything from the wreckage.

That much is evident from the two documents produced, headed respectively A citizens’ agenda and The Period of reflection and Plan D, the former to which we referred in our previous post on roaming calls.

But, if the documents are a crie de coeur, they also display how deeply inadequate is the thinking of the commission. So enmeshed in their leaden, bureaucratic prose are they (and their scribes) that they are unable to break free from their own jargon, and the constraints of their own thinking. Thus do they deliver tomes of such unmitigated tedium that it would have been a miracle if any passing hack had been able to glean anything newsworthy from them.

If there was any single theme, however, it is a plaintive plea to the "citizens of Europe", to the effect that "we are nice people and we want to be loved… or even just noticed… please… pretty please…". Citizens, they bemoan, echoing the special Eurobarometer, "have a fairly low knowledge and interest in how the EU institutions work. On the same time (sic) they have high expectations on delivery and policy content." You wish.

At least Frau Dr. Merkel knows what is going on. It was no coincidence that yesterday she made her first major address to her parliament on “Europe”. These things never are. And, at least the Guardian - on of the few British newspapers to report the event – got it right with its headline, declaring: "Merkel calls for fundamental review of European mission".

Merkel, the Guardian tells us, is saying that the EU's "historic rationale of preserving peace after the second world war was no longer sufficient". The EU had to do more than just keep the peace. It needed to reconnect with its citizens, she said, adding: "We must, and I am deeply convinced of this, critically review the state of the European project."

You can see why, therefore, the commission is so keen to have a debate. But, as long as the "little Englanders" of the domestic political establishment and the media are besotted with their own local affairs, that debate ain't going to happen in Britain. "Europe" still remains "boring" and we have much more important things to blather about.

The conspiracy of silence redoubles.