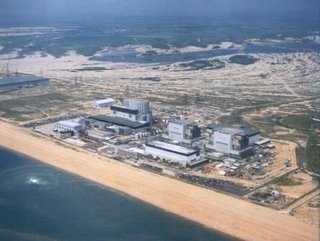 Although Tony Blair has put the nuclear option "back on the agenda with a vengeance", his avowed enthusiasm is creating stresses in the European Union, where there is a considerable divergence of opinion on the utility of nuclear power.

This, reports Reuters could well impact on the attempt by EU member states to forge a common energy policy, highlighted by a meeting in Austria of energy and environment ministers this weekend.

For instance, Austria's environment minister, Josef Proell, believes that nuclear power "isn't the future.". He is to stage a debate in the EU parliament in June to discuss "strategic planning" on nuclear energy, when he will try to convince his EU partners to look at other sources such as renewable energy.

On the other hand, Finnish Environment Minister Jan-Erik Enestam, who will be in the chair when his country takes on the rotating presidency of the EU in July, believes that nuclear is a necessary, if temporary, solution. "Climate change will bring new elements to the discussion. It's not that black and white anymore," Enestam says. "If you have to choose among the existing resources and existing technology, you can't exclude nuclear power."

The Finns are already planning to add a fifth nuclear plant to their portfolio. The want to avoid using coal and prefer building its own plants to importing nuclear-generated electricity from Russia. "In Finland you have to choose between two evils: nuclear power or coal, and nuclear power is not as bad as coal," Enestam declares.

To add to the discord, his near-neighbour, Latvian Environment Minister Raimonds Vejonis, has other ideas. More than 60 percent of his population is against nuclear yet it relies on nuclear power plants in next-door Lithuania, from which it imports some of its electricity. The country will suffer after 2009 when Lithuania closes nuclear plants and no decision has yet been made on how to compensate for that loss.

In Germany, however, there is very little debate, as the government plans to phase out nuclear power completely. German environment minister Sigmar Gabriel argued that it is unfair to solve our energy problems and to put the waste to future generations. He also takes the view that, if industrialised nations chose nuclear energy, they will have fewer arguments to prevent countries such as Iran and North Korea from attempting to do the same.

Other major players, like Italy, Spain and Poland, have yet to declare their views but we do know that France is committed to expanding its nuclear capability.

The current technology, of course, still relies on nuclear fission – splitting the atom – but, as the arguments develop, it seems that this will not be the only nuclear fission in the EU. The member states also are – it seems – irreconcilably split.