It may be pedantic, but… 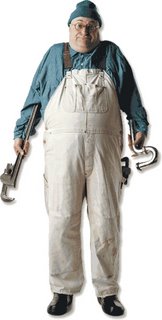 After the climbdown by the Toy Parliament last February over the "watered down" version of the contentious Services Directive, the plumbers of Europe are now on the march – or so we are told.

This arises from an agreement yesterday by the Council of Ministers on a draft of the directive, prompting headlines from multiple sources, effectively announcing that the new law was in the bag. Thus said The Guardian, "Workers given the right to ply their trades throughout EU", while the Financial Times proclaimed, "EU hails 'breakthrough' cross-border agreement" and the faithful BBC declared, "EU strikes deal on service sector".

But, actually, no… not yet, at any rate. Even the BBC headline is technically incorrect because only the Council of Ministers has reached a deal, not the EU as a whole. There are significant differences between the text agreed by the Council and that approved by the EU parliament, not least that lawyers were added to the Council's draft, despite the objections of the French.

What has happened, therefore, is that the Council has reached what is known in Community jargon as a "common position", as indeed did the EU parliament when it passed the first reading of the directive last February. Now, the draft law goes back for a "second reading" by the parliament, which has the option of amending its position to conform with the Council, or of sticking to its guns.

In the former case, the law goes though but, if there is no agreement, the draft has to go in front of the "conciliation committee", chaired by the commission, where the council and the parliament attempt to thrash out their differences. If there is no agreement, the law falls. Where there is agreement, this leaves the "third reading" in the parliament, which again offers and opportunity to reject what is by then a compromise draft, in which case the law falls at this hurdle.

Most likely, the parliament does not have the heart for another, highly public scrap with the member states, so the chances of a deal being stitched up are quite good. Nevertheless, it is premature to imply that the law is in the bag. As they say, there is many a slip twixt cup and lip.