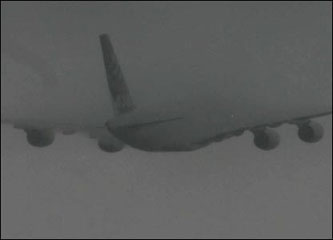 When it enters service, the A380 will overtake Boeing's 747 jumbo jet as the world's largest commercial jet, but this will come at a price. To accommodate the aircraft, Heathrow operator BAA is having to spend some £500 million upgrading the airport, including strengthening a runway at a cost of nearly £200 million.

The fanfare of the aircraft's arrival also obscures that fact that the Airbus company is flying into stormy weather. Not least, despite Gordon's praise for "European co-operation", that co-operation is about to end when BAE Systems pull out of the Airbus consortium.

Despite the hubris, the order book for the $13-15 billion programme is stuck at 159 aircraft after six years of marketing, and is now facing new competition from Boeing which has launched an updated 747. While this seats only 450 passengers, against the A380's maximum 550, Boeing's new aircraft, code-named the 747-8, is offering exceptional fuel efficiency which could rule out the use of an A380 on routes that do not utilise its full 550 seats. Industry analysts estimate that this could cost Airbus most of the 200-500 seat market, worth over $600 billion in the next 20 years.

A more immediate problem, though, is the A350, the long distance wide-bodied competitor to Boeing's 787 "Dreamliner", which is fast coming unstuck. Having attracted a mere 100 orders – none from first-line carriers – against 400 for the 787, potential purchasers have warned Airbus that it will need a complete re-design if it is to become competitive, pushing the company against its financial limits.

Turning to the traditional source of development funds, however – the governments of the countries which produce the Airbus – has put the company in the firing line from the US again, which has warned that any increase in subsidies would intensify the long-running dispute, currently before the World Trade Organisation.

As a result, for the first time in five years, Boeing's order book now exceeds that of Airbus and, in order to recover its position, Airbus is looking at having to launch an all-new, wide-body family to replace both the A340 and A350.

Apart from creating financial strains, and bringing the WTO issue back to the boil, this would create serious credibility problems for the company. It would be forced to admit that it launched an aircraft (the A350) and made performance promises to customers well before the design was finalised, which it cannot currently deliver.

On top of that, EADS, which owns the bulk of Airbus – and is set to acquire the BAE Systems share – is looking to expand its activities in the defence sector, which will compete for funding priorities within the company. That will be happening while Airbus suffers a short-term loss of sales as the new range is developed and, if that was not enough, around 2010, the company will have to invest in developing a replacement for its best-selling A320.

Yet, if it wants to remain a serious player in the civil aviation market, Airbus will have no option to meet all these challenges. Thus, with the A380 still nowhere near break-even, the next six to eight years looks to be a lean time for the European manufacturer. Boeing, on the other hand, is set to romp away, into new realms of profitability.

The A380 flying into Heathrow today may have been applauded by Gordon Brown but its parked shape alongside the custom-built pier begins to look more like a stranded whale, a fitting symbol for the "old Europe" that created it.