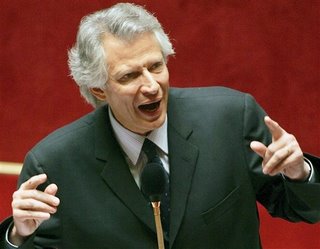 As the BBC website puts it: Dominic de Villepin can do nothing right at the moment. If it is not carbecues in the banlieux, it is students demonstrating in favour of continuing high unemployment (not for them, one assumes); if it is not anybody demonstrating then he is getting flak for trying to smear his rival, Nicolas Sarkozy, a scandal that we intend to cover separately.

So what is wrong with organizing an exhibition of modern French art? Plenty, it seems.

“Some artists have decided to boycott the event, angry that the government should interfere in the arts and that it is attempting to declare an "official" French style.”

Which is, of course, rubbish as the state has always interfered in French art, as, indeed, some people acknowledged by angrily comparing de Villepin with Louis XIV. But, of course, they could just as easily compare him with Louis XV, the Revolutionary leaders, de Villepin’s beloved Napoleon, the latter’s relative Napoleon III or, for that matter, Georges Pompidou.

The trouble is, de Villepin does not seem to be able to carry it off.

The art appears to be as good or as bad as any exhibition of that kind but it is possible that the French public and media are more discerning than those of other countries.

“One of the exhibition's curators from the ministry of culture, Bernard Blistene, describes the six-week display as "a showcase for all that is best in modern France".

Despite the fact that some of the installations are uncomfortable - a video film of someone undergoing plastic surgery, super-sized skeletons towering over pretend wind farms, series of photographs of immigrant street protests - Mr Blistene denies the exhibition gives an impression of a country in pain and turmoil and refutes the idea that the show is a political comment on the state of France.

"This show is about reality and shows France as a diverse society. It's an exciting exhibition. Art is always about politics of course - you can never find art that isn't political."”

How very true, about art being political, that is. It is, however, often a mistake to let artists of any kind make political statements (unless they happen to be poets like John Milton, Andrew Marvell or Shelley). For what do we get if we let artists opine? A lot of trite nonsense, that’s what.

“Gerard Fromanger, an established painter, withdrew his work from the exhibition this month. He declined to give an interview to the BBC about his decision.

But he has been quoted before in French newspapers saying that while he has admired Mr de Villepin in the past, especially when the minister stood up to the US over going to war in Iraq, he does not believe the show has been well thought-out or that enough artists were consulted.”

One can almost feel sorry for M de Villepin.