The march of the EuroArmy 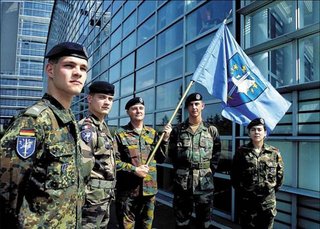 As flagged up just over a week ago, twenty-two European Union member states have signed up to the "voluntary" code of conduct of defence procurement.

By so doing, they are agreeing to open defence contracts worth €1 million or over to competitive tendering from any company within the EU, so waiving their "national interest" rights under Article 296 of the Treaty which, hitherto, have excluded the bulk of defence purchasing from the procurement directives.

The agreement is only "voluntary" in the sense that there is no legislative compulsion, but it was reached against the background of the commission threatening to propose legislation if the member states did not come into line. No doubt, a concerted effort by the EU leaders could have seen off the commission but this would have led to an undignified public scrap and, it appears, none of the players seemed willing to fight this out in a public arena.

As it is, two nations to opt out of this round of integration – Spain and Hungary – with Denmark having a permanent opt-out. Whether the commission will takes steps to hoover up the stragglers remains to be seen.

Business Week reports this move as "designed to open the 25-nation bloc's euro30 billion (US$39 billion) arms industry to increased cross-border competition," citing European Defence Agency, but, of course, it is no such thing.

This is all part and parcel of the commission's plan to create a European defence industry which is the precursor to developing a European defence identity. The Eurocrats are well aware that, in these days of technology-driven warfare, he who controls the procurement decisions can eventually control the shape and structure of the armed forces which rely on the equipment and thence decide on deployment plans.

Needless to say, we get the ritual burbling from Nick Witney, CEO of the European Defence Agency, who tells us that, "This regime will create new opportunities for companies across Europe, strengthen our defence technological and industrial base and offer better value for money to the armed forces and to taxpayers."

That is so much bullshit. The arrangements are designed primarily to exclude non-EU bidders and keep defence procurement within the EU "family", many of which players are party or wholly state-owned and heavily subsidised.

However, the business-orientated language is enough to gull the increasingly dim and ill-informed media commentators into believing that this move is simply a commercial issue, to be relegated to the business columns, if indeed it is reported at all. That it is a major step forward in the progressive integration of the armed forces of EU member states will completely pass them by.

And thus, stealthy step by stealthy step, does the process of integration continue, unrecorded and unchecked, all because our media fails to do its job, our politicians have lost the plot – and no one gives a damn anyway.