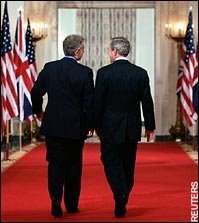 In a surprise move following the Bush-Blair summit yesterday, president Bush has agreed to agreed to step up Britain's access to sensitive technology in the F-35 Joint Strike Fighter. "Both governments agree that the UK will have the ability to successfully operate, upgrade, employ, and maintain the Joint Strike Fighter such that the UK retains operational sovereignty over the aircraft," the official statement read.

Conveyed by Reuters, via DefenseNews, The Times, Financial Times and others, this now makes it very difficult for the UK to dump the aircraft and buy alternatives for the UK's "super-carrier" programme.

This is against the background of UK manoeuvring and heavy spin, with the government cosying up to the French and even agreeing to consider the Rafale, following the Pentagon's attempt to cancel the second JSF engine, in which Rolls Royce have a forty percent stake.

Now that the second engine programme looks set to continue, the indications are that Bush has been listening to heavy lobbying from voices such as Liam Fox and The Heritage Foundation. 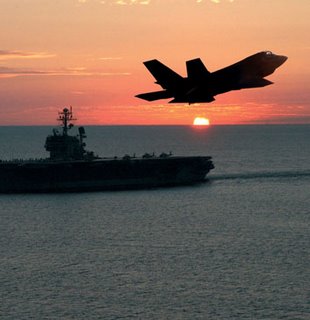 Bush has certainly been counselled that it would be politic to make a gesture towards Blair at this critical juncture in the Iraq venture and has been warned that refusal to allow the British access to JSF technology would strengthen the drive towards European defence integration that is already a well advanced feature of British defence policy.

In yesterday's statement, therefore, reference was made to the need to enhance US-British military cooperation, with both Bush and Blair stating that the two countries must "strengthen and deepen the relationship between their defence establishments, achieve fully interoperable forces and leverage the strength of their industries."

Interestingly, that very issue was raised this week in the House of Lords during a starred question by the Lord Hoyle on the JSF. The Lord Pearson of Rannoch asked:

My Lords, would it not be understandable for the Pentagon to be nervous of sharing stealth and other sophisticated technology with us, if it feared that we, under our EU commitments, might have to share it with the French and, through them, more widely? If that is so, does it not mean that the special relationship is pretty well over?

Defence procurement minister, Lord Drayson, predictably, dismissed the idea, stating that there was "absolutely no requirement on us, under British law or any EU treaty, to share technology related to this or any other defence-related project," a somewhat disingenuous answer given the 2000 "Framework Agreement" and Britain's commitment to the European Defence Agency (EDA) - to say nothing of last week's procurement agreement, about which The Business tomorrow will have some comment.

Thus, although the JSF contract is something of a litmus test in the progression of British integration into the European defence camp, the existence of the Framework Agreement, the EDA and other developments – all on the back of the Helsinki European Council of 1999 (when the European Raid Reaction Force was agreed) - demonstrate that nothing fundamental has changed.

Although the US rightly fears that technology passed to the UK will find its way to our gallant European "allies", the risk appears to have been judged worth taking – but it has the hallmarks of a temporary political expedient, calling the bluff of the "Europe firsters" in the British defence establishment who have been trying to engineer the cancellation of the JSF.

In many respects though, this is too little, too late. While it is currently "cutting edge" technology, the JSF is, in a sense, yesterday's project. Procurement decisions are made for ten and twenty years hence and the thinking is focused on unmanned aircraft. 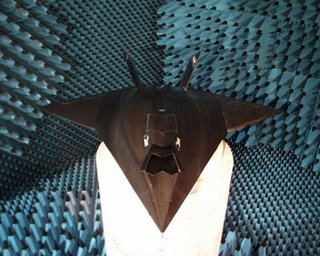 Already, the UK has abandoned any plans to develop a new generation of manned aircraft, but has also pulled out of the partnership with the United States on the development of advanced UAVs in a programme known as FOAS.

On the other hand, the French-led programme, code-named "Neuron" is powering ahead. Although the MoD is being very reticent about publicly declaring an interest, if the UK does opt-in to this multi-national programme, continued British participation in the JSF programme will prove to be nothing more than a temporary setback for the promoters of European integration.