Human rights are safe in their hands 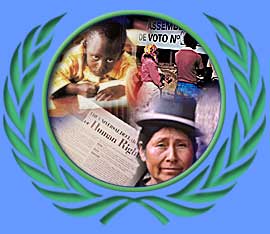 The new Human Rights Council of the new reformed United Nations has been elected and very entertaining it was to watch the webcast of the announcement. My colleagues wondered whether I was listening to the listing of the World Cup teams.

So here they are, the countries that will defend human rights in the world.

Well, OK, Sudan is not on it but Sudan was not encouraged to be a candidate. Iran was a candidate and was not elected so, I suppose, we must be thankful for small mercies. Libya is not on the new Council.

John Bolton has been triumphantly right. As he said, the new council has taken over the weaknesses” of the human rights commission.

While his opinion was shared by various commentators on all sides of the political divide, Louise Arbour, the UN Human Rights Commissioner, has welcomed the new body, at least, according to the People’s Daily:

“"The signs from the election of the 47 members of the council are very encouraging for the future of this new body," said the high commissioner in a statement.

The polls were not "business as usual", as there were genuinely contested candidacies and all those elected made specific pledges and commitments expressing their concrete engagement to promote and protect human rights, she said.”

Reassuring or what? Some of our readers might ask (after they managed to stop laughing) what happened to the great UN reform that was going to do away with the unfortunate rules of the discredited Human Rights Commission under which countries were elected regionally, thus putting known violators of human rights on it.

Well, it is quite simple, really. The members are no longer elected regionally but by the entire General Assembly of 191 members. However, (please pay attention at the back) candidates are still divided into regions with a set number to be elected from each one.

Thus, regions with few countries (if any) that have even remotely acceptable human rights records, like Africa have 13 representatives while Western Europe and others have 8. On the whole, the World Cup draw seems to me to be a little more fairly arranged.

Another complication is the number of years each country will serve on the Council.

In the future, nations will be elected to three-year terms of office.”

Confused? You are meant to be. But worry not.

“Candidates submitted pledges and commitments to promote and protect human rights. According to the regulations establishing the new council, its members will be the first to have their human rights records reviewed.”

Can’t wait to see how the various members will vote on each other’s record. What will Azerbaijan say about Cuba, for instance, or Morocco about Algeria or Tunis?

Just as you thought that the UN could not descend any further, having reached absolute rock bottom, a new chasm opens up. As one of the participants of our forum reminded us, the Weekly Standard has found another interesting development in that august body:

“Switzerland’s nomination of its national, Jean Ziegler, to membership on the U.N. Subcommission on the Promotion and Protection of Human Rights illustrates in a nutshell (and a nut) why there is so little hope for meaningful reform of the world body.

The subcommission should not be confused with the U.N. Commission on Human Rights, which has just held its last meeting. The commission has been abolished at the initiative of Secretary General Kofi Annan, who lamented that it had become a stain on the U.N.'s reputation.

However, the subcommission, which is a body of "experts" rather than diplomats, does not go out of existence with the commission. It presumably will now be linked with the new Human Rights Council, which is slated to replace the commission as part of the overall reform plan.”

It is hard to see what the role of this subcommission might be but, I have no doubt, it is an expensive proposition in both political and financial terms. And who is Jean Ziegler?

“Until now, he has served as the old commission's "special rapporteur on the right to food." A sociologist by training and a politician, Ziegler did not bring to his post any particular expertise on food or agriculture. His credentials were all in the realm of ideology. Ziegler's main idea was anti-Americanism. He was a founding editor of the journal L'Empire, and you don't need many guesses to know which "empire" was the subject. The United States, according to Ziegler, is an "imperialist dictatorship" that is guilty, among other atrocities, of "genocide" against the people of Cuba by means of its trade embargo.”

Wonderful. Just what one needs in a spokesman on human rights on whichever commission or subcommission he might be sitting. I take it no mention was ever made by M Ziegler of the large number of people being imprisoned in Cuba for opposing Fidel Castro’s one-party rule? No, I thought not.

Mind you M Ziegler’s career gets better and better:

“In 1989, Ziegler was one of a group of self-described "intellectuals and progressive militants" who gathered in Tripoli to announce the launching of the annual "Muammar Qaddafi Human Rights Prize," awarded by the government of Libya. Ziegler explained that the purpose of the Qaddafi prize was to counterbalance the Nobel prize, which, he said, constituted a "perpetual humiliation to the Third World."

Winners of the Qaddafi prize have included Fidel Castro, Louis Farrakhan, and recently Venezuela's Hugo Chávez. When no individual of such luminous human rights credentials has presented himself, the award has gone to collectivities. In 1996, it went to a female member of the Cuban Communist party's central committee, a leader of a Ba'ath party women's organization in Saddam's Iraq, and a couple of other "symbols of women's struggle for freedom."

In 1990, it went to the "Stone Throwing Children of Occupied Palestine" and in 1991 to the "Red Indians." In 2002, the awardees were "13 intellectual and literature personalities," of whom the most notable were the French Holocaust denier Roger Garaudy and (you guessed it) Jean Ziegler.”

As they say, you couldn’t make this up. And if you did, no publisher or TV director would accept such a plot-line. For goodness’s sake, they would say, go away and write something a little more realistic.